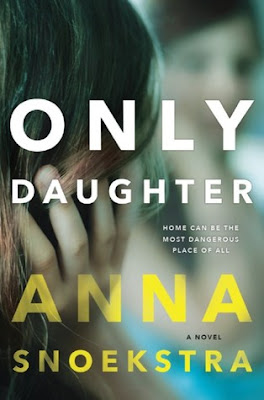 Only Daughter by Anna Snoekstra

She'd been enjoying her teenage summer break: working at a fast-food restaurant, crushing on an older boy and shoplifting with her best friend. Mysteriously ominous things began to happen—blood in the bed, periods of blackouts, a feeling of being watched—though Bec remained oblivious of what was to come.

Eleven years later she is replaced.

A young woman, desperate after being arrested, claims to be the decade-missing Bec.

Soon the impostor is living Bec's life. Sleeping in her bed. Hugging her mother and father. Learning her best friends' names. Playing with her twin brothers.

But Bec's welcoming family and enthusiastic friends are not quite as they seem. As the impostor dodges the detective investigating her case, she begins to delve into the life of the real Bec Winter—and soon realizes that whoever took Bec is still at large, and that she is in imminent danger.

I'm sorry to say that I didn't really enjoy or get this book. It started off fine and the premise was certainly interesting but there were all these little things and threads of potential that were never carried out or explained. We don't under the impostor's motivation until the book is over, if even then. I also don't think the mystery was really thought out or explained. Yes, there are parts of this book that were gruesome and extremely troubling but there were so many dots not connected and details not explained with sufficiency or accuracy so as to actually help the story. There is such a glut of thrillers out there right now and so many good ones that I would skip this and move on to the next on your list.

Would it be better to feel afraid all the time or to feel nothing at all?  She hadn't decided yet. The sun glared down at her through a milk skin of clouds.  She would probably be burnt if she stayed out here much longer.  But she liked this image of herself.  Lying on her back in Lizzie's swimming pool. Green bikini, freckled arms outstretched, belly button filling up with water as she breathed.  She wondered if she was being watched right now.  The bedrooms of Lizzie's brother and father looked down onto the pool.  She'd caught both of them staring at her a few times over the past year. It should gross her out, but it didn't. 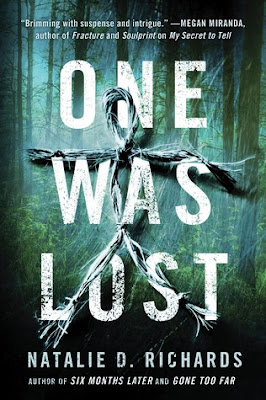 One Was Lost by Natalie D. Richards


Damaged. Deceptive. Dangerous. Darling. Are they labels or a warning? The answer could cost Sera everything.

Murder, justice, and revenge were so not a part of the plan when Sera set out on her senior camping trip. After all, hiking through the woods is supposed to be safe and uneventful.

Then one morning the group wakes up groggy, confused, and with words scrawled on their wrists: Damaged. Deceptive. Dangerous. Darling. Their supplies? Destroyed. Half their group? Gone. Their chaperone? Unconscious. Worst of all, they find four dolls acting out a murder—dolls dressed just like them.

Suddenly it's clear; they're being hunted. And with the only positive word on her wrist, Sera falls under suspicion…

This one was very much in the vein of I Know What You Did Last Summer and other, similar books by R.L. Stine or Christopher Pike, just not as good as I remember those YA horror/thriller books being. One, there was a serious focus on Sera's crush/former crush and why she thought she couldn't be with him; I found her reasoning to be quite lacking and also the fact that she would be focused on him and kissing him when someone was trying to kill her. I wish this sub-plot hadn't even existed; the thrill ride would have been more present and tangible had this "romance" not been a part of this book.  That being said, there were some fun twists in this but something about the writing left me fumbling and wanting more depth to the plot, the story and the characters.


The trip was supposed to be great. Mr. Walker practically promised mythical nirvana out here. We'd see mountains and ancient trees and unicorns that come to drink at sunset or some crap. Extremely remote, he said. Personally enlightening, Ms. Brighton added.

They pegged the remote part. We're in Nowhere, West Virginia, where the only thing less common than people is cell phone reception. Of course, we're not remote enough to get me away from the one boy I'm trying desperately to avoid.

Sadly, neither of these thrilled me much; hopefully you will have better luck with one or the both of them. One Was Lost comes out tomorrow October 4, 2016, while Only Daughter was released last month on September 20, 2016.