Review: Eligible: A Modern Retelling of Pride and Prejudice by Curtis Sittenfeld 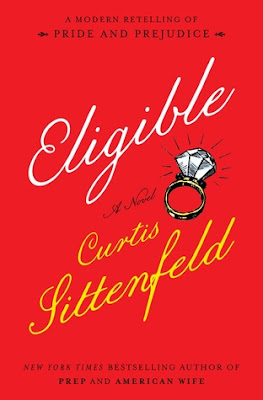 This version of the Bennet family—and Mr. Darcy—is one that you have and haven’t met before: Liz is a magazine writer in her late thirties who, like her yoga instructor older sister, Jane, lives in New York City. When their father has a health scare, they return to their childhood home in Cincinnati to help—and discover that the sprawling Tudor they grew up in is crumbling and the family is in disarray.

Youngest sisters Kitty and Lydia are too busy with their CrossFit workouts and Paleo diets to get jobs. Mary, the middle sister, is earning her third online master’s degree and barely leaves her room, except for those mysterious Tuesday-night outings she won’t discuss. And Mrs. Bennet has one thing on her mind: how to marry off her daughters, especially as Jane’s fortieth birthday fast approaches.

Enter Chip Bingley, a handsome new-in-town doctor who recently appeared on the juggernaut reality TV dating show Eligible. At a Fourth of July barbecue, Chip takes an immediate interest in Jane, but Chip’s friend neurosurgeon Fitzwilliam Darcy reveals himself to Liz to be much less charming. . . .

And yet, first impressions can be deceiving.

I love Curtis Sittenfeld -- I consider her one of my favorite authors and I've read and adored all four of her novels released prior to this one.  You also may know that I adore Pride and Prejudice, I re-read it every year and it never ceases to enchant me; I am a hardcore Darcy/Lizzy shipper.  So when I heard that one of my favorite authors was writing a modern retelling of one of my all time favorite books, I was ecstatic.  Eligible was one of my most anticipated reads for 2016!  And so you can imagine my disappoint in writing this review. I have never been one to forego retellings of my favorite books; I have loved many Jane Austen retellings, re-imaginings and even some of those books that purport to take off where P&P ends (Only Mr. Darcy Will Do and Mr. Darcy Takes A Wife are my two favorites). Let me be clear, my rating has nothing to do with the writing of this book -- the writing was impeccable and I have no qualms with it.  Rather,  Eligible made me analyze whether I would actually still like Elizabeth Bennet, and the entirety of P&P, if it were written today.  I suppose that in and of itself is a testament to the cannon of Eligible and how well done it is.  BUT, and this is a big but, I don't really want to imagine a P&P in which I dislike every character, in which Lizzie is unbelievably fallible and ordinary, in which Mr. Bennet is a jerk, in which even Jane is supercilious and annoying -- maybe the Bennet family really is awful and I've been deluded by nostalgia that is P&P read by a modern audience -- but I would rather go on pretending than to have my entire remembrance of one of my favorite books shaken up beyond belief.  The one bright spot in Eligible, for me, is Kathy DeBourgh -- I won't spoil you and tell you who/what she is in this book but she was my favorite character, which is something I never thought I'd write regarding P&P!

What I am trying to ineloquently to say is that I would rather never read another P&P retelling again than have my love and devotion to P&P diminished -- maybe Curtis Sittenfeld is spot on in making us question whether Elizabeth Bennet is the heroine we've always imagined and whether we'd actually ship Liz and Darcy if they lived today but, for me, I don't want to be asked those sorts of questions.  I prefer to let P&P live in the past and in my mind, and to continue to consider it one of the best romances ever written.

Unleashing Mr. Darcy and Prejudice & Pride are modern retellings I loved; they both are cannon (with an obvious twist) that engender the same feelings I have when I read P&P.  Eligible, while it made me question everything I thought I knew and think about P&P, did not engender those same feelings.  I don't necessarily know if that's a good or bad thing but, as a mood reader, this one was a disappoint to me.  Perhaps, with time, I will come to love this one more but my immediate hope for a smart and charming P&P retelling was not satisfied; even though not a retelling, Dear Mr. Knightley by Katherine Reay is another must read for a contemporary, smart and well done Jane Austen homage.

I would still recommend this to anyone that is open to a (very) modern Pride and Prejudice retelling.  If you are in want of a humorous and sarcastic take on P&P versus a sweet and romantic retelling, Eligible might just be the book for which you've been searching!  Eligible comes out today April 19, 2016, and you can purchase HERE!

There's a belief that to take care of someone else, or to let someone else take care of you that both are inherently unfeminist.  I don't agree with that idea.  There's no shame in devoting yourself to another person, as long as he devotes himself to you in return.