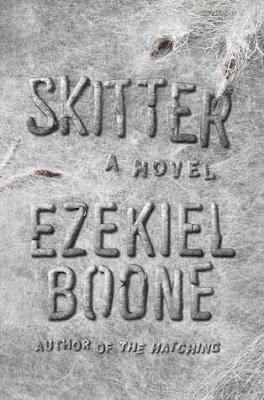 Skitter (The Hatching #2) by Ezekiel Boone

Tens of millions of people around the world are dead. Half of China is a nuclear wasteland. Mysterious flesh-eating spiders are marching through Los Angeles, Oslo, Delhi, Rio de Janeiro, and countless other cities. According to scientist Melanie Gruyer, however, the spider situation seems to be looking up. Yet in Japan, a giant, truck-sized, glowing egg sack gives a shocking preview of what is to come, even as survivors in Los Angeles panic and break the quarantine zone. Out in the desert, survivalists Gordo and Shotgun are trying to invent a spider super weapon, but it’s not clear if it’s too late, because President Stephanie Pilgrim has been forced to enact the plan of last resort: The Spanish Protocol. America, you are on your own.

I think what I like most about this series is how quick it darts from place to place to show the impact across the world and, yet, it's never too much to follow along.  It keeps it interesting but somehow is not overly complicated.  I don't have to think about all the threads in this book because they just work so well.   That being said, this book picks up right where the first book left off and things are even more dire in this book.  A new breed of spiders has emerged and they can't figure out how to stop it.  I liked the various perspectives, as I've said, from behind the scenes of the government to troops on the ground, to the average person who really doesn't know what's going on.  I can't wait to see what happens in book 3 and if they can figure everything out.

Skitter came out earlier week on May 2, 2017 and you can purchase HERE. I definitely recommend this series for summer reading - something about the hint of fear and the action would be great to read on the beach.  You can read my review of the first book in this series, The Hatching, HERE.

"If we'd known about these spiders in the way that he meant, we'd have tried to prepare for them. What I'm saying is that we knew about them without knowing about them. We knew they existed but only somewhere deep in our caveman brains. Think about it. Why are so many people afraid of spiders? There's a decent number of poisonous spiders, but the chances of a human dying from a spider bite are remote. More people are killed by cows than spiders in the US every year. The daddy longlegs? Toxic as hell, but a daddy longlegs can't even bit a human."

"The reality is that the chances of a human getting killed or even harmed by spider are so low that meaningful number of poisonous spiders might as well be zero. And yet, most people are scared shitless of them. I think there's a reason for that. You see something creepy crawling out of the corner of your eye, and nit's not your cellphone-- talking, sushi-ordering, Internet-using brain responding It's that little nugget of gray that is an evolutionary holdover from when we thought banging two rocks together was a scientific accomplishment. That's the part of your brain that's screaming."