Review: She's Not There by P.J. Parrish 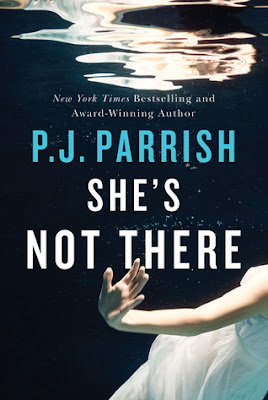 She's Not There by P.J. Parrish

They say it’s better to battle the devil you know. But what if you don’t recognize him before it’s too late?

She knows her name is Amelia, but after waking up in a hospital battered and bruised with just the clothes on her back, it’s all she knows. Unable to piece together her shattered memory, she’s haunted by a vision: menacing faces and voices implying her nightmare is far from over.

Relying only on her wits and her will to live, Amelia becomes a fugitive from a mysterious man, and a life she can’t even remember. But the past she’s fleeing has no intention of letting her go.

She's Not There was an intriguing mystery/crime thriller although the end of the book left me a bit disappointed.  The first half of the book was seriously good and I read it so fast but as the mystery was revealed, my interest waned.  I am finding this a lot lately with thrillers and I wonder if it's me or if there are just many books being released in this genre after the popularity of Gone Girl and The Girl On The Train that these books are being released without proper editing.  Just a theory I have but I wish the strength of the first half of this book had carried on!

I would recommend this to anyone that likes thriller mysteries along the lines of Gone Girl. I also got a serious Sleeping With The Enemy vibe!  She's Not There is scheduled to be released September 8, 2015, and you can purchase HERE!

The smell was pungent-- mothballs, dust, dime-store perfume and a faint trace of body odor-- and it was so familiar that Amelia was certain she had surely been inside a thrift store before.  But she couldn't remember, and she was  woman who Chanel dresses, wasn't she?