Review: Some Kind of Hero (Troubleshooters #17) by Suzanne Brockmann 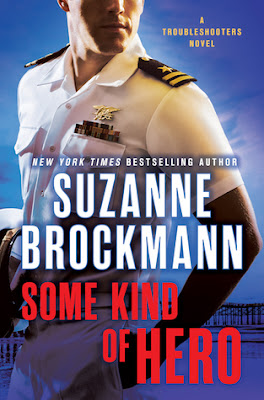 Some Kind of Hero (Troubleshooters #17) by Suzanne Brockmann

Navy men don’t come tougher than Lieutenant Peter Greene. Every day he whips hotshot SEAL wannabes into elite fighters. So why can’t he handle one fifteen-year-old girl? His ex’s death left him a single dad overnight, and very unprepared. Though he can’t relate to an angsty teen, he can at least keep Maddie safe—until the day she disappears. Though Pete’s lacking in fatherly intuition, his instinct for detecting danger is razor sharp. Maddie’s in trouble. Now he needs the Troubleshooters team at his back, along with an unconventional ally.

Romance writer Shayla Whitman never expected to be drawn into a real-world thriller—or to meet a hero who makes her pulse pound. Action on the page is one thing. Actually living it is another story. Shay’s not as bold as her heroines, but she’s a mother. She sees the panic in her new neighbor’s usually fearless blue eyes—and knows there’s no greater terror for a parent than having a child at risk. It’s an ordeal Shay won’t let Pete face alone. She’s no highly trained operative, but she’s smart, resourceful, and knows what makes teenagers tick.

Still, working alongside Pete has its own perils—like letting the heat between them rise out of control. Intimate emotions could mean dangerous, even deadly, consequences for their mission. No matter what, they must be on top of their game, and playing for keeps . . . or else Pete’s daughter may be gone for good.

This was one of my most highly anticipated reads for 2017 because I have been waiting YEARS for a new book in this series.  There was some talk that maybe it was over but I was so happy to be back with the Troubleshooters! No one rights better romantic suspense in the military vein than Suzanne Brockmann and I seriously loved the characters of Pete and Shay that she created in this book.  Shay is an author (romantic suspense, of course) and she was so awesome.  Everything about this was seamless.  I also think no one can write alternating/multiple POV better than SB - she is so good at creating unique voices that are still easy to read. Although I wasn't actually in love with the sub-story of Pete's daughter's romance (it felt a bit off), I was still all in for this one and devoured it in a day.  I really hope this means there might be even more books in this series coming?  Maybe?!

Some Kind of Hero comes out next week on July 11, 2017 and you can purchase HERE.  I love this series so much!

He just pulled back to look into her eyes again, and time seemed to slow and not-quite stop, but change and expand. He'd experienced something similar a few times, while out on ops with the teams. There was a name for it, that sense of being present and acutely, intensely aware: kairos. The word also meant opportunity, and he was not a fool, so he slowly leaned in and when, once more, she didn't pull away, he kissed her again.