Waiting on Wednesday: A Wife of Noble Character by Yvonne Georgina Puig 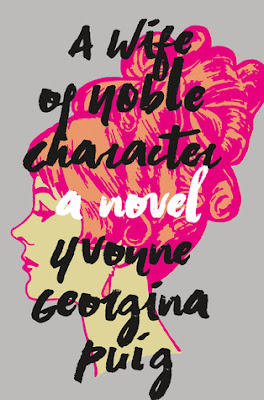 A Wife of Noble Character by Yvonne Georgina Puig

A juicy, sprawling comedy of manners about a group of thirtysomethings stumbling into adulthood among Houston's high-powered, oil money elite

Thirty-year-old Vivienne Cally is wealthy in name only. Orphaned as a child and raised by a cold but regal aunt, Vivienne was taught to rely on her beauty and Texas tradition, and is expected to marry a wealthy and respectable man who will honor the Cally name. Friends with Houston's most prominent families, she's a beloved fixture at social events, and suffers no shortage of access to the city's most eligible bachelors. Preston Duffin has known Vivienne and her set since childhood, though he's never shared their social aspirations or status. About to graduate from a prestigious architecture program, he is both fascinated and repelled by this group of friends he sits on the cusp of, one that shares none of his curiosity about the world beyond Houston. He's long admired Vivienne's beauty, but isn't sure he holds any place in so traditional a life. Intrigued by the extent to which Preston challenges the only way of life she's ever known, Vivienne both courts his attention, and rebuffs his critiques of her antiquated values. Inspired by Edith Wharton's The House of Mirth, A Wife of Noble Character shares the original novel's sharp social commentary at the same time that it illuminates the trappings and rewards of coming-of-age that are wholly unique to the twenty-first century. Part biting wit, part good old-fashioned love story, it takes readers from Texas to Paris and Switzerland and back again, and will charm both fans of Wharton and anyone who has ever struggled to find their path in life.

Have you read The House of Mirth? It is amazing!  So I am so intrigued by this modern retelling/inspired work!!  A Wife of Noble Character is scheduled for release on August 2, 2016, and I can't wait!