This & That – 2 Books with Strong Friendships, a Quest, and SHIPs!

“This and That” is a feature created by Megan @ Reading Books Likes a Boss and borrowed here with permission. Megan created this feature and I owe this post to her brilliance.  Not only should you check out her blog, generally, but her This & That recommendations are utterly perfect! Megan created this feature to showcase books that either sound similar or have similar themes, and thus I am recommending that you read the "that book" because you are a a fan of the “this book.” 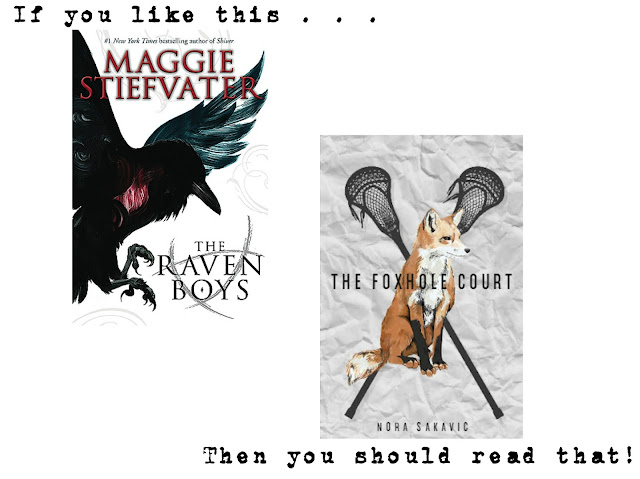 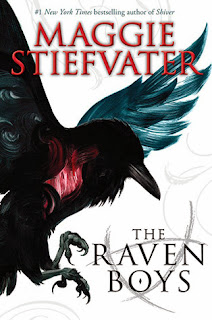 THE RAVEN BOYS (The Raven Cycle #1) by Maggie Stiefvater

Every year, Blue Sargent stands next to her clairvoyant mother as the soon-to-be dead walk past. Blue never sees them--until this year, when a boy emerges from the dark and speaks to her.

His name is Gansey, a rich student at Aglionby, the local private school. Blue has a policy of staying away from Aglionby boys. Known as Raven Boys, they can only mean trouble.

But Blue is drawn to Gansey, in a way she can't entirely explain. He is on a quest that has encompassed three other Raven Boys: Adam, the scholarship student who resents the privilege around him; Ronan, the fierce soul whose emotions range from anger to despair; and Noah, the taciturn watcher who notices many things but says very little.

For as long as she can remember, Blue has been warned that she will cause her true love to die. She doesn't believe in true love, and never thought this would be a problem. But as her life becomes caught up in the strange and sinister world of the Raven Boys, she's not so sure anymore. 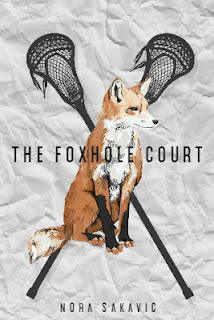 THE FOXHOLE COURT (All for the Game #1) by Nora Sakavic

Neil Josten is the newest addition to the Palmetto State University Exy team. He's short, he's fast, he's got a ton of potential—and he's the runaway son of the murderous crime lord known as The Butcher.

Signing a contract with the PSU Foxes is the last thing a guy like Neil should do. The team is high profile and he doesn't need sports crews broadcasting pictures of his face around the nation. His lies will hold up only so long under this kind of scrutiny and the truth will get him killed.

But Neil's not the only one with secrets on the team. One of Neil's new teammates is a friend from his old life, and Neil can't walk away from him a second time. Neil has survived the last eight years by running. Maybe he's finally found someone and something worth fighting for.

p.s. I am using the redesigned cover for The Foxhole Court made my Diva Booknerds because it is gorgeous and because I think that the original covers are pretty terrible and may turn you off from the series (although they shouldn't!!)

So if you're like me, you waited so long for The Raven King and by now you've read it and you have the most massive book hangover EVER and you're wondering what to read now . . . and that feeling inspired this post!

Since I first read The Foxhole Court, I have thought about The Raven Cycle series. Putting aside the awesome (seriously, some of my all time favorites) ships (especially the M/M ships) in both of these books, what I think makes me think of them together is the friendships.  In both books, we have an outsider joining a seriously intense group of friends and, ultimately, the friendships become even stronger.  We have a lot of heartache in both (although All for the Game is definitely more violent) but also a lot of hope.  We have both groups of friends on a quest for something and the narrative of the books in both series is not only one of self-discovery and coming of age but the journey/the quest moving the plot forward while the self-discovery occurs.  I could break down a lot of the characters in a side by side comparison but I don't want to give you any spoilers for either series. Although TRC is full of magical realism and MS creates a simply amazing world, All for the Game has some incredible world building as well around an imaginary sport and the seedy (and often explosive) underworld connected to this college sport and its competition.  Lastly, I will tell you that both of these series rank in my top five favorite series of all time -- they are so, so good and I hope you read them both!!