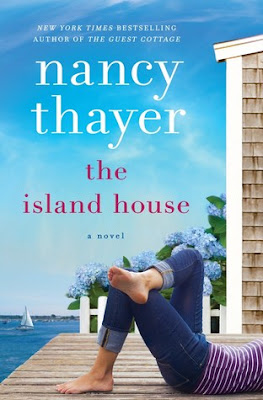 The Island House by Nancy Thayer

The charms of Nantucket tempt a woman to leave her established life in Kansas City—but with a piece of her heart, and a love interest, in each world, she discovers she must look within to choose the right path.

Every summer since college, twenty-nine-year-old Courtney has traded the familiarity of the Midwest for the allure of Nantucket. Now an established university professor in Kansas City, she finds herself caught between two lifestyles and two very different men. She chooses Nantucket and the glamorous life she associates with it, unaware that the summer will take an unexpected turn, and she will have to let her heart decide what it truly wants.

I feel like summer requires books by Elin Hilderbrand, Nancy Thayer, etc . . . probably because they all release a new book every summer and it's usually set in the summer.  How I long to visit Nantucket and see if it really is as amazing as these authors describe.  This book, once again, sets us right in the heart of Nantucket and in the midst of a fun and sprawling family.  The matriarch, Susanna, has always had "summer children," the name she gives to the best friends of her four children that have spent a lot of summers living in the family's huge house on Nantucket.  This summer it's her 60th birthday and all her summer children return for the party, each with their own secrets.  What worked me was the setting and the family but the first half of the book (before the real conflict) was so much better than the second half.  Still an enjoyable read and I'll add it to my beach reads shelf for that particular mood!

Pick this one up if you want a contemporary beach read although I much preferred Nancy's release last summer, The Guest Cottage.  I also always have to recommend Elin Hilderbrand's backlist for  the BEST Nantucket settings.  The Island House is scheduled to be released today May 31, 2016, and you can purchase HERE.

You would think, Courtney, thought, that a woman as versed in literature as Courtney would not be surprised by anything that happened between a man and a woman.

You would think that any woman, no matter what she did, couldn't be shocked by any man if she had grown up with a father, a brother and a male best friend.