Review: The Versions of Us by Laura Barnett 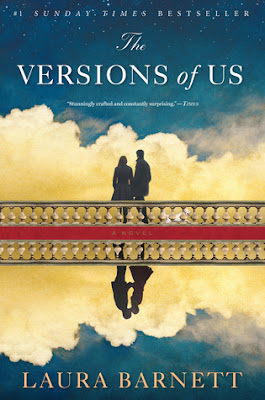 The Versions of Us by Laura Barnett

The one thing that’s certain is they met on a Cambridge street by chance and felt a connection that would last a lifetime. But as for what happened next . . . They fell wildly in love, or went their separate ways. They kissed, or they thought better of it. They married soon after, or were together for a few weeks before splitting up. They grew distracted and disappointed with their daily lives together, or found solace together only after hard years spent apart.  With The Versions of Us, Laura Barnett has created a world as magical and affecting as those that captivated readers in One Day and Life After Life. It is a tale of possibilities and consequences that rings across the shifting decades, from the fifties, sixties, seventies, and on to the present, showing how even the smallest choices can define the course of our lives.

So the premise of this one was incredible and the style in which it was written totally intrigued me.  The books starts off with one moment and three different possibilities occur in three subsequent chapters depending on what happens in that moment.  The book then continues to take place in three chapter blocks, detailing each of these versions through the years.  This is not a new approach but it was done well here.  The problem for me lay in what happened in all those spanning 50+ years between this couple -- it was just so depressing to me.  Maybe it's because I don't want to think that people are inherently so awful but I also had a hard time understanding why these people who were so in love would cheat on each other again and again and eventually change so much.  I guess this was meant to show a realistic portrayal of marriage over 50 years no matter what happened in that first moment but I was hoping for more of a love story with smooth lines.  This is still a love story but it is so heart-wrenching -- probably moreso for me than other books like Outlander or something because it was so very real.  A bit too real, maybe.  This could totally have been my mood but I was just so sad reading this one.

I would recommend this to fans of realistic fiction, this is sort of contemporary and historical based on its time span as well as fans of Maybe in Another Life by Taylor Jenkins Reid.  This was exceptionally well done -- I just wasn't quite in the mood to read such a downer.  I did love the ending, though!  The Versions of Us was released last week week on Tuesday, May 3, 2016, and you can purchase HERE.

He is, Jim knows, far more afflicted by nostalgia than his wife: it is he who captures each new episode in the children's lives — birthdays, first steps, outing to the theatre — with his camera who sends off each roll of film to be developed, pores endlessly over each clutch of photographs.  it is, Jim supposes, the same urge that once drove him to paint — the need to capture a moment, whether real or imagined, before it disappears.  And yet the attempt, it seems to him now, is always doomed to fail, whether in art (those meaningless abstract daubs on which he'd wasted so much time, and which now induce in him only a slight embarrassment, and, yes, a certain sadness) or in those family snapshots.  There is always a slippage between the image in his memory —  Eva brushing a lock of hair away from her face; Jennifer in her school uniform, so smart, so quietly grown-up; Daniel grinning messily from his high chair — and the photographs he spread out on the kitchen table.