Review: A Song to Take the World Apart by Zan Romanoff 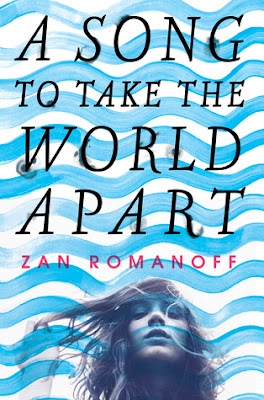 A Song to Take the World Apart by Zan Romanoff

What if you could make someone love you back, just by singing to them?

Hanging out with Chris was supposed to make Lorelei’s life normal. He’s cooler, he’s older, and he’s in a band, which means he can teach her about the music that was forbidden in her house growing up. Her grandmother told her when she was little that she was never allowed to sing, but listening to someone else do it is probably harmless— right?

The more she listens, though, the more keenly she can feel her own voice locked up in her throat, and how she longs to use it. And as she starts exploring the power her grandmother never wanted her to discover, influencing Chris and everyone around her, the foundations of Lorelei’s life start to crumble. There’s a reason the women in her family never want to talk about what their voices can do.

And a reason Lorelei can’t seem to stop herself from singing anyway.

This started off so good!  I really liked the feel of this when I first started reading it but that feeling was a bit misleading.  I liked Lorelei as a Sophomore with a crush on Chris, the lead singer of a local band (and a Senior at her high school).  I liked her anticipation of going to shows and of little interactions with Chris in the hallway.  The real problem with this book was when the magical realism started to happen. This book is loosely based and/or has elements of the Sirens myth and when those elements started becoming a part of the story, they were not explained well enough/described with sufficient accuracy as so to actually be interesting or a realistic narrative.  Still, even considering that, I liked this more than most probably will. I really liked Lorelei and her twin brothers, Nik and Jens.  They were well flushed out characters for me and I liked reading about their lives without any of the mythology. I seriously wish this had just been a straight up contemporary YA -- trying to infuse the paranormal/mythology just muddied it up and, ultimately, didn't help this book.

I think this book is described a contemporary YA with magical realism -- that is fairly accurate but I'm not sure to what I would compare this.  I did have definite vibes of both Kissing Ted Callahan (and Other Guys) by Amy Spalding (LA + band vibes) and My Soul to Take by Rachel Vincent (not knowing what you are/paranormal vibes) so you may want to give this a try if you're a fan of either.  A Song to Take the World Apart comes out today September 13, 2016, and you can purchase HERE.

She didn't recognize the gentle lick of warmth in her belly as want. She only knew that it was unfamiliar, the way the sensation lit her up. That was the day she discovered why they call it longing: because desire is full of distance and unfilled space.