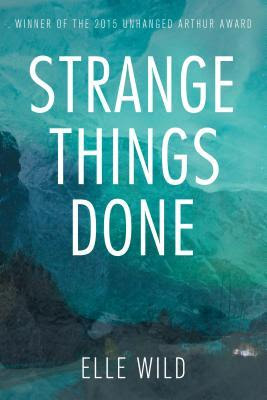 A dark and suspenseful noir thriller, set in the Yukon.

As winter closes in and the roads snow over in Dawson City, Yukon, newly arrived journalist Jo Silver investigates the dubious suicide of a local politician and quickly discovers that not everything in the sleepy tourist town is what it seems. Before long, law enforcement begins treating the death as a possible murder and Jo is the prime suspect.

Strange Things Done is a top-notch thriller — a tense and stylish crime novel that explores the double themes of trust and betrayal.

So I really REALLY didn't like Jo, the MC of this story, when I first started reading. And I never ended up liking her for even a minute during and after I finished the book. So that was strike one for me -- I had a hard time understanding Jo's woe is me attitude and reason for moving to this remote area of the world and I had an equally difficult time following her repeated and stupid actions in the course of the book. She was tracking a killer but she always trusted all the wrong people and I guess I assumed she would have had better sense since she was supposed to be a top notch investigative journalist. The problem is that nothing was unique about this story -- I feel like I've already read this story and seen movies with this exact premise.  I kept waiting for something interesting or unique to happen . . . but it didn't.  And this wasn't very thrilling -- there was a little action but nothing like those other, superb thrillers that I've read recently that kept me on my toes and the edge of my seat.  This was just so-so -- I liked the setting but had this been set in a city, it would have fallen flat.

This was sort of a mash-up of Extreme Exposure (investigative journalism romantic suspense) and In the Barren Ground (remote and insanely cold setting in winter) although not as successful as either and with way less romance than either of those unless you count falling for the VERY wrong person. Strange Things Done comes out tomorrow on September 24, 2016, and you can purchase HERE.

Jo stood listening, waiting for something intangible while the steam of her breath moistened her woolen scarf. The sky was still grey, reflected in charcoal shades in the ice beneath blowing snow, like a child's messy chalkboard.  The ferry had vanished, as though the river had claimed another victim. Joe wondered how thick the ice would have to be before it could be crossed. She pictured herself skating away on it, doing slow, graceful loops until she disappeared into the horizon line.