Review: You Will Know Me by Megan Abbott 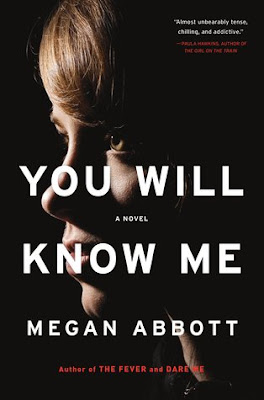 You Will Know Me by Megan Abbott

Katie and Eric Knox have dedicated their lives to their fifteen-year-old daughter Devon, a gymnastics prodigy and Olympic hopeful. But when a violent death rocks their close-knit gymnastics community just weeks before an all-important competition, everything the Knoxes have worked so hard for feels suddenly at risk. As rumors swirl among the other parents, revealing hidden plots and allegiances, Katie tries frantically to hold her family together while also finding herself drawn, irresistibly, to the crime itself, and the dark corners it threatens to illuminate. From a writer with "exceptional gifts for making nerves jangle and skin crawl," (Janet Maslin) You Will Know Me is a breathless rollercoaster of a novel about the desperate limits of desire, jealousy, and ambition.

In this book, we are thrown both into a mystery but also the world of elite gymnastics and I'm not sure which is more terrifying. I found myself immediately transfixed by the mystery and inability to truly know or understand a parent's utter and complete devotion to an elite gymnast -- you can't know it unless you live it. And yet, here, we get to live in this world where maybe nothing is as it seems. Although I figured out the mystery before it was revealed (but not early on), this was one instance where I wanted to be wrong. I just devoured this one, waking up early solely to finish the book within less than 24 hours -- I was thrilled, I was spellbound, my heart was racing and I loved it. How can we know what we would do in a situation until or unless we are in it?  And what would you do if you had given up your entire life for one thing and were on the precipice of reaching it? Such unknowable questions and, yet, you will know the feelings that such questions could elicit while reading this book. I also really liked that this was told completely from Katie's POV -- I wouldn't exactly call her an unreliable narrator and that was so refreshing.

You Will Know Me came out earlier this year on July 26, 2016, you can purchase HERE, and I definitely recommend this one to thriller fans, especially if you have ever wondered about the life of an elite athlete/gymnast!  You will not be disappointed by this dark and thrilling entrance into that world!

There was a peculiar tension among the girls, all of whom wore the blank expressions and big eyes of figure in Keane paintings.  No one would listen to the substitute tumbling coach pitching in for Hailey or to the halfhearted drilling by Amelise.

Girls kept falling.  Dominique Plonski rolled her ankle in the landing pit and limped off to her mother's arms.

At the vault, Devon struggled with her Yurchenko, the first twist so painfully slow she couldn't make the second.  Foot hopping on the dismount, her face dazed and puzzled.