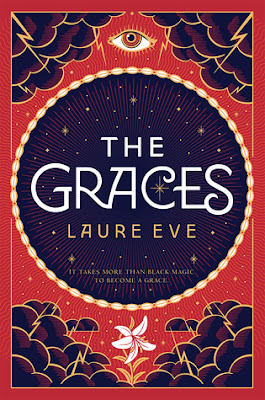 In The Graces, the first rule of witchcraft states that if you want something badly enough, you can get it . . . no matter who has to pay.

Everyone loves the Graces. Fenrin, Thalia, and Summer Grace are captivating, wealthy, and glamorous. They’ve managed to cast a spell over not just their high school but also their entire town—and they’re rumored to have powerful connections all over the world. If you’re not in love with one of them, you want to be them. Especially River: the loner, new girl at school. She’s different from her peers, who both revere and fear the Grace family. She wants to be a Grace more than anything. And what the Graces don’t know is that River’s presence in town is no accident.

This fabulously addictive fantasy combines sophisticated and haunting prose with a gut-punching twist that readers will be dying to discuss. Perfect for fans of We Were Liars as well as nostalgic classics like Buffy the Vampire Slayer and the 1996 movie The Craft, The Graces marks the beginning of a new wave of teen witches.

Wow, that was not good.  This is honestly what comes to my mind immediately upon finishing this book.  I was slightly curious enough to keep reading but I definitely will not read any further books in this series. I think the biggest problem for me was just a total miss on maturity level -- on one hand, the author treated these characters (the MC is 15) as experienced with very mature things such as sex, drugs and alcohol while on the other hand, their reaction to the most basic of things was very odd/very immature.  At no time did I think, well that seems like a way someone would react to this occurrence.  It was almost like these characters were living on another planet.  If this book had one strength, it was probably Summer Grace -- she was the character I connected most with in this book but she was not a narrator and we really don't know what she's thinking most of the time.  This isn't a criticism except to say that it's not good when the narrator/MC is totally unbelievable and unreliable such that you can't fathom her thoughts or reactions, at all.  There was a "twist" at the end but at that point I was so not invested in the book that I wasn't shocked or surprised, I just felt let down.

Hopefully you have better luck with this one than I did!  It is a bit of a mash-up between Twilight and The Craft but both of those are pretty amazing compared to this book. The Graces comes out next week on September 6, 2016, and you can purchase HERE.

Before the Graces noticed me, I was the quiet one who stuck to the back corners of places and tried not to draw attention.  A couple of other people had been friend enough when I'd first arrived--we'd hung out a little and they'd given me a crash course in how things ran here.  But they got tired of the way I wrapped myself up tight so no one could see inside me, and I got tired of the way they all talked about things I couldn't even muster up fake enthusiasm for, like getting laid and partying and TV shows about people getting laid and partying.

April 14, 2016
I Love This Trope, Sub-Genre, Setting is a new feature on my blog in which I discuss a trope, sub-genre or setting that I love and tell you about books that are shining examples of said trope, sub-genre or setting.  Feel free to play along and please let me know about your favorite books in this realm and whether you like this trope, sub-genre and/or setting as much as I do! Today I am spotlighting the trope of:  My Best Friend's Brother/My Brother's Best Friend , which I would define as any book where the heroine either has a crush on or falls for her brother's best friend or her best friend's brother. I have to confess that I love this trope in nearly all of its iterations!  I have a younger brother so I never got to crush on any of his friends but it's fun reading about that and it's equally as fun as reading about falling for your best friend's brother -- instant sisters!  I know there are a ton
30 comments
Read more