Review: Swear on This Life by Renee Carlino 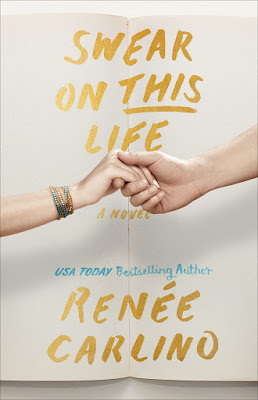 Swear on This Life by Renee Carlino

From USA TODAY bestselling author Renée Carlino (Before We Were Strangers), a warm and witty novel about a struggling writer who must come to grips with her past, present, and future after she discovers that she’s the inspiration for a pseudonymously published bestselling novel.

When a bestselling debut novel from mysterious author J. Colby becomes the literary event of the year, Emiline reads it reluctantly. As an adjunct writing instructor at UC San Diego with her own stalled literary career and a bumpy long-term relationship, Emiline isn’t thrilled to celebrate the accomplishments of a young and gifted writer.

Yet from the very first page, Emiline is entranced by the story of Emerson and Jackson, two childhood best friends who fall in love and dream of a better life beyond the long dirt road that winds through their impoverished town in rural Ohio.

That’s because the novel is patterned on Emiline’s own dark and desperate childhood, which means that “J. Colby” must be Jase: the best friend and first love she hasn’t seen in over a decade. Far from being flattered that he wrote the novel from her perspective, Emiline is furious that he co-opted her painful past and took some dramatic creative liberties with the ending.

The only way she can put her mind at ease is to find and confront “J. Colby,” but is she prepared to learn the truth behind the fiction?

Ever since I read and loved this author's 2015 release, Before We Were Strangers, this book has been one of my most anticipated reads for this year.  Unfortunately, it failed to capture that same magic and, for me, was overall very disappointing.  While I still believe the premise of Swear on this Life is amazing and that the book had such potential, its execution did not live up to expectations.  I think the ultimate issue in this one is the dialogue -- it felt so forced, so unrealistic.  While the premise is perhaps not the most realistic, this is supposed to be a contemporary romance; from that I would more or less expect some real feelings and real dialogue and a story that is not completely out of the realm of possibility or too fantastical.  Instead, none of this book was believable and it was because of the dialogue and the characters' interactions -- I could have put anything else aside had there been some realness and depth.  I don't have a problem with characters that make mistakes but I can be annoyed with characters who are completely inauthentic and not true to themselves; sadly, Emiline was this to a T.  The thing is, I was so rooting for this book and for Emiline and Jase but we find out very early on how miserable Emiline is in her relationship; she still dreams of and kind of still loves Jase and, yet, she is totally inauthentic and disingenuous to both sides about her true feelings.  I wanted to shake her so many times for continuing to allow herself to be so miserable and so passive.  I don't typically mind cheating in books as in it's not something that I actively avoid reading about and/or that makes something an automatic DNF for me but this book tested my patience with this situation.  Without giving too much else away, I'm sorry that this didn't work for me but it felt so off, forced, inauthentic and the dialogue was really rather tragic.

Swear on This Life comes out today, August 9, 2016, and you can purchase HERE.

I could feel his heart beating fast against my chest.  "Nobody knows."

"I know, I hate it too, but I guess it's like reading a good book.  The kind where you don't want to skip pages to see what happens at the end.  Each moment is a story in itself."

"Would you say every moment is good? What about my father and your mom?" I sniffled and wiped tears from my eyes.

"Our story is great. Maybe not all the other shit, but the story of us is perfect, Em."