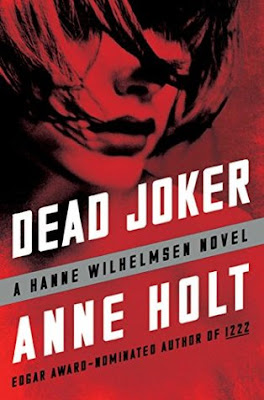 Chief Public Prosecutor Sigurd Halvorsrud’s wife is found dead in front of the fireplace in the family living room. The cause of death: she has been brutally decapitated. Her husband, who witnessed the grisly murder and is himself covered in blood, immediately falls under suspicion, though he claims his wife’s killer was Ståle Salvesen, a man he’d prosecuted years before. Detective Inspector Hanne Wilhelmsen is called in to lead the investigation with her old colleague, Billy T. Despite the circumstantial evidence, Hanne is unconvinced of Sigurd Halvorsrud’s guilt—that is, until a witness says he saw Ståle Salvesen commit suicide by jumping off a bridge days before the murder took place. Then a journalist at one of Oslo's largest newspapers is found beheaded. What links these two horrifically violent crimes?

The demanding investigation soon clashes with a terrible crisis in Hanne’s personal life. Cecilie, the woman she has lived with for almost twenty years, has fallen seriously ill and doesn’t have much time to live.

With a savage killer on the loose, Hanne must ask herself: Is the truth worth chasing at all costs?

Well if you are familiar with this series (which you don't necessarily have to be to read this -- it can be read as a standalone but I would recommend starting from the beginning), then there will definitely be more than a few surprises for the characters in this book!  Hanne is her usual compulsive, introspective and a bit selfish/dense self but she does surprise a bit with doing a few things out of character.  They mystery was interesting but I did feel a bit deflated in how it was figured out because I was expecting a bit more of a cover-up.  Still, this is a great example of the genre and you will love it if you like a Scandinavian setting and police procedural murder mysteries!

I will definitely continue this series -- I like this genre and Hanne Wilhelmsen is such an interesting character.  You can read my review of book 4 in this series, HERE. Dead Joker came out last month on July 26, 2016, and you can purchase HERE.

Lawyers were a waste of space.  He had always known that. Usually he laughed at them, these gowned, snotty-nosed, self-important and omniscient knights at the court of Lady Justice.  They could never control themselves.  As soon as they got a whiff of something resembling a setback, they pounced.  Rather than lose face.  Whatever the cost. Get even. Fire away. Show off.