Review: She's Got a Way (Echo Lake #3) by Maggie McGinnis 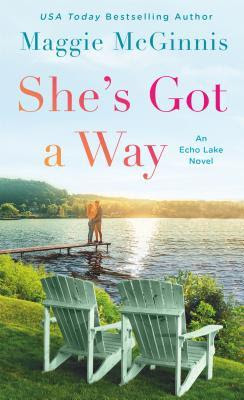 She's Got a Way (Echo Lake #3) by Maggie McGinnis

Gabriela O’Brien is devoted to the girls at Briarwood Academy—even when their bad behavior earns them an entire summer at a remote campground in Echo Lake, Vermont. When the headmaster assigns Gabi to be their chaperone, how can she refuse? A long, hot summer with neither indoor plumbing nor wireless access might be just what she needs to get her own life in order…right?

Before Briarwood took over Camp Echo, Luke Magellan spent years there helping troubled boys. When four spoiled rich girls and their seemingly uptight den mother show up for the summer, it’s hard to hide his amusement as he watches them tackle the great outdoors. But it’s even tougher to resist the passion he sees in Gabi—especially when he learns about her past, and sees how much she cares about her students. Is this destined to be just a grownup version of a summer-camp romance—or can they find enough in common to build a love for all seasons?

This is just one of those books that will not be memorable to me -- it was fine for a contemporary romance but nothing special. And the first half (before the romance really kicked in) was pretty boring.  Gabi was a bit self-righteous and I found myself rolling my eyes a few times.  That said, the setting is kind of fun -- set at a summer camp except it's not being run as a camp in this book, really.  Instead, Gabi is somehow forced (she's the dorm mom for a prestigious boarding school) to chaperone four 'problem' girls to this camp for the summer instead of going on her planned vacation.  This was the first red flag to me -- she had a planned flight and just has to drop it to chaperone these girls?  Very weird.  When they arrive, there are no facilities (bathrooms or campsites) and, yet, these four 16 year old girls are supposed to build bathrooms, campsites, etc. with no experience.  The scenario really did not seem realistic especially for a snooty boarding school.  We soon learn how awful the boarding school really is but the backgrounds of both Gabi and Luke (the on site "handyman") are really glossed over. Of course, they fall for each other even though this is made to seem like the absolute worst thing possible for both of them (again, why?).  I was more or less skimming by the end and not sure I will read more by this author but you may have better luck.

I don't slum, Luke. I don't fall for people based on their economic level or their resumes.  I most certainly don't kiss people I wouldn't want to see the next morning.  And I have never done the hookup thing. Ever.  I don't. I won't. I kissed you because I like. I kissed you because you looked so flipping gorgeous sitting there in the moonlight that I couldn't resist kissing you.  And I kept kissing you because I liked it.  I liked you.  It had nothing to do with vulnerability or fear or any of the other things you threw at me.