Review: Been Here All Along by Sandy Hall 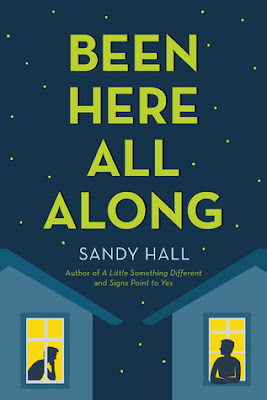 Been Here All Along by Sandy Hall

Gideon always has a plan. His plans include running for class president, becoming head of the yearbook committee, and having his choice of colleges. They do NOT include falling head over heels for his best friend and next door neighbor, Kyle. It’s a distraction. It’s pointless, as Kyle is already dating the gorgeous and popular head cheerleader, Ruby. And Gideon doesn’t know what to do.

Kyle finally feels like he has a handle on life. He has a wonderful girlfriend, a best friend willing to debate the finer points of Lord of the Rings, and social acceptance as captain of the basketball team. Then, both Ruby and Gideon start acting really weird, just as his spot on the team is threatened, and Kyle can’t quite figure out what he did wrong…

This was really sweet and, honestly, had it just been a bit more straightforward about discovery and first love, I probably would have rated it higher.  The problem was that the conflict in this was centered around the possibility of outing someone against their will; I can't even imagine such an awful fate let alone in high school.  It was so painful to imagine this and the character more of or less responsible for this got on my serious SHIT list pretty quickly.  I just felt so overwhelmed with empathy. which I know is a something real that happens but it was so hard to read.  All that being said, I love love loved Gideon and Kyle-- their friendship just felt so real, so genuine and I wanted to wrap them both up in a blanket of comfort so neither would have to ever deal with anything bad.  I felt so protective of them both!

This is definitely a fun YA version of the boy next door trope -- Kyle and Gideon were such amazing friends without giving more away and this book was, ultimately, a really sweet read.  Been Here All Along comes out next week on August 30, 2016, and you can purchase HERE.

He chews his lip, and all I can think about is kissing him.  It's been building up inside of me for months, and I just know I need to get it out of my system.  I need to go for it.  I want to sig next to him on the couch, and I want our knees to touch.  I want to remember that everything that happened last night and everything we said was real.

I put my hand on the back of his neck and pull him close, standing on my tiptoes to press my lips to his.  It's quick and dry and maybe not the most romantic or centered kiss that has ever passed between two people.

But it's our first, and I immediately know that I don't want it to be our last.