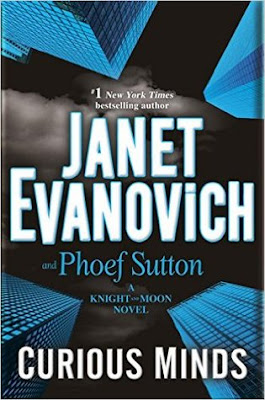 Emerson Knight is introverted, eccentric, and has little to no sense of social etiquette. Good thing he’s also brilliant, rich, and (some people might say) handsome, or he’d probably be homeless. Riley Moon has just graduated from Harvard Business and Harvard Law. Her aggressive Texas spitfire attitude has helped her land her dream job as a junior analyst with mega-bank Blane-Grunwald. At least Riley Moon thought it was her dream job, until she is given her first assignment: babysitting Emerson Knight.

What starts off as an inquiry about missing bank funds in the Knight account leads to inquiries about a missing man, missing gold, and a life-and-death race across the country. Through the streets of Washington, D.C., and down into the underground vault of the Federal Reserve in New York City, an evil plan is exposed. A plan so sinister that only a megalomaniac could think it up, and only the unlikely duo of the irrepressibly charming Emerson Knight and the tenacious Riley Moon can stop it.

This was pretty bad.  Admittedly, it's been a long time since I read anything by Janet Evanovich.  I used to read the Stephanie Plum series but probably stopped reading it about eight books and many years ago.  This book reminds me of why I stopped reading that series -- it's these characters that are supposed to be over the top funny but just aren't.  They are almost so eccentric/quirky/weird for the sake of being all of these things but it just feels inauthentic. However, I decided to give this a chance because it was billed as romantic suspense and you know I'm a sucker for that genre.  So the thing is that I did like Riley for most of the book but I didn't like the story and, again, the rest of the characters, especially the secondary characters, just felt so freaking phony.  I understand this is the set-up for a series so we are not really to the romance yet but the suspense was . . . as suspenseful as a Stephanie Plum novel (i.e. really not suspenseful).  I'm not sure who this author is writing for -- you may really like this if you're a Stephanie Plum fan because the writing is similar and there are similar "funny" characters but, for me, it just fell flat.

Curious Minds came out earlier this week on August 16, 2016, and you can purchase HERE.

The three greatest contributions the United States made to world culture are jazz, rock and roll, and ranch dressing.