Review: In the Barren Ground by Loreth Anne White 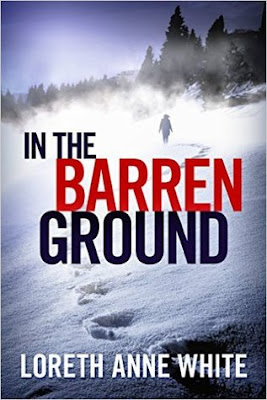 In the Barren Ground by Loreth Anne White

In the Barrens, a vast wilderness in northern Canada bordering the Arctic Circle, night consumes every hour of the winter. Humans are scarce; ferocious predators roam freely. Locals say spirits do, too.

Rookie cop Tana Larsson doesn’t mind the dark and quiet. Five months pregnant and hoping to escape the mistakes of her past, she takes a post in Twin Rivers, population 320. Maybe here she can find peace and community for her child.

But with her superior out of commission, Tana becomes the sole police officer in 17,500 square miles. One bitter night, she gets a call about the fatal wolf mauling of two students, and the only way to reach the remote scene is to enlist the help of the arrogant, irritatingly handsome Cameron “Crash” O’Halloran, a local bush pilot with a shady reputation for smuggling and a past cloaked in shadow.

When the macabre scene they uncover suggests violence much more sinister than animal, Tana must trust Crash if she wants to protect the town—and herself—from the evil that lurks in the frozen dark.

This is the first book I've read from this author but it won't be the last because I completely loved this! It was super spooky and there were twists and turns that kept me invested and not wanting to put this down. The character development was excellent. Now to talk about probably the most unique part of this book and my favorite thing: the setting and amazing descriptions of being in such a setting.  While I have not been to the Arctic Circle, I now feel like I have based on the amazing description -- all of my senses were engaged and I could feel the darkness, the cold, the life and the struggle in this tough and remote part of the world.  Tana was easy to imagine in this setting and I could not admire her and love her more as a character -- you want only good things for her and Crash is definitely a good thing. One last thing -- the romance is definitely a very slow burn and much of the book is spent more on tracking the crime than the romance, necessarily.  This implicitly worked for me because it felt real and worked for the story; however, I did want to tell you in case you were expecting a straightforward romantic suspense with an equal combination of romance and suspense.

This book is truly a dark, atmospheric romance and police procedural with a bit of a Gothic and/or horror feel; it was totally unique and it's hard to think of anything that is like it!  In the Barren Ground comes out today, August 16, 2016, you can purchase HERE, and I definitely recommend this one to fans of dark romantic suspense!

"Tana!" he yelled as he saw her disappearing around the side of his house.  He broke into a run, caught her by the arm.

She swung around, eyes sparking.  Her mouth was close.  She was breathing heavily, their breaths clouding together.  Snow settled like confetti on her fur hat. He wanted to kiss her.  By God, he just wanted to kiss that full mouth, bury himself in her freshness and youth, cover himself in it.  his eyes burned, heat seared his chest.  And suddenly he ached--to star again, a second change, just to try.  But he didn't dare. He could not do that to her.  She was young, idealistic. He was far too jaded, carried too much dangerous baggage.  She was going to be a mother, and there was no way in hell he could realistically be there for her, or a kid, so why in hell was his head even going there?