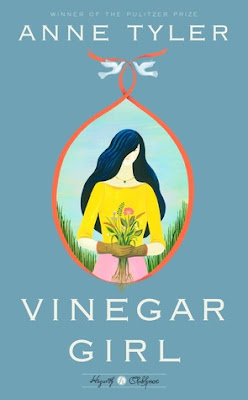 Pulitzer Prize winner and American master Anne Tyler brings us an inspired, witty and irresistible contemporary take on one of Shakespeare’s most beloved comedies

Kate Battista feels stuck. How did she end up running house and home for her eccentric scientist father and uppity, pretty younger sister Bunny? Plus, she’s always in trouble at work – her pre-school charges adore her, but their parents don’t always appreciate her unusual opinions and forthright manner.

Dr. Battista has other problems. After years out in the academic wilderness, he is on the verge of a breakthrough. His research could help millions. There’s only one problem: his brilliant young lab assistant, Pyotr, is about to be deported. And without Pyotr, all would be lost.

When Dr. Battista cooks up an outrageous plan that will enable Pyotr to stay in the country, he’s relying – as usual – on Kate to help him. Kate is furious: this time he’s really asking too much. But will she be able to resist the two men’s touchingly ludicrous campaign to bring her around?

I'm actually kind of surprised I finished this one but it was short so I kept hoping it would get better.  You can add this to the same category as Eligible in that it was a highly anticipated retelling for me by an author I usually love but that, ultimately, I did not enjoy.  I was bored more than anything else while reading this -- the characters were very bizarre, which usually doesn't bother me, but it's almost as if they were weird for weird's sake.  They were so over the top in their idiosyncrasies as if to be comedic but it just fell flat for me. This was also so devoid of plot that it could have been a single chapter.  Perhaps I'm exaggerating but this was so joyless -- I'm not sure how the other Hogarth Shakespeare retellings are but hopefully more fun than this one.

Perhaps it's just been too long since I read The Taming of the Shrew but, like Eligible, I found this to be over the top in its sarcasm, almost to the point of parody rather than a modern retelling and that didn't work for me.  Vinegar Girl came out earlier this week on June 21, 2016, and you can purchase HERE.

"In my country, they have proverb: 'Beware against the sweet person, for sugar has no nutrition.'"

This was intriguing, Kate said, "Well, in my country they say that you can catch more flies with honey than with vinegar."

"Yes, they would," Pyotr said, mysteriously. He had been walking a couple of steps ahead of Kate, but now he dropped back and, without any warning, slung an arm around her shoulders and pulled her close to his side.  "But why you would want to catch flies, hah? Answer me that, vinegar girl."