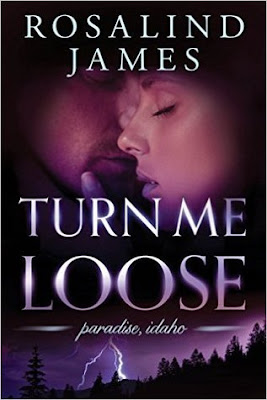 Rochelle Marks is working hard to build a name for herself that has nothing to do with her pinup-girl curves. She’s made mistakes in the past, and now she’s trying to stop her little sister, Stacy, from making worse ones. Rochelle’s done with being nothing more than someone’s good time. Even if that someone is the one-night stand who turned her life upside down before vanishing—and who’s just arrived in Paradise, Idaho, looking to pick up where they left off.

Tech mogul Travis Cochran’s hard-won new priorities have brought him to town as a university lecturer, but he’s come for something else, too: the smart, sassy, gorgeous woman who’s been in his head for months. When Stacy’s choices draw her big sister into a web of down-home crime and cold-blooded murder, Travis’s mission gets a whole lot more urgent. Now convincing Rochelle to trust him isn’t just about winning her back. It may be the only way to keep her alive…

Rosalind James always delivers for me!  This was actually the first book I've read in this series, her new romantic suspense series, and I really enjoyed it and can't wait to read the first two books (which I bought upon release). So, first, you can definitely read each as a standalone although, from context, I could tell that there are overlapping characters. And, second, I love both the heroes and heroines that Rosalind James creates -- they are always so real.  By "real," I mean not perfect and yet, always crazy character connection and chemistry.  Travis and Rochelle were definitely two such characters -- intense chemistry and both so real -- they each had a past but lived in the present with each other.  It was fun to see the suspense twist in this one, too -- it was well done and such a fun read!

I would definitely recommend this to fans of romantic suspense -- this is a new to me genre for Rosalind James but I LOVE her Escape to New Zealand series.  She is a go-to for me! This one also reminded me a bit of one of my favorites by Linda Howard, Open Season.  Turn Me Loose was released last month on May 17, 2016, and you can purchase HERE.

She'd thought she hadn't wanted to hear his story, because it hadn't fit her model of her dream man. But here were no dream men. He was just a man. Just a man screwing up and determined to try again. Just like her.