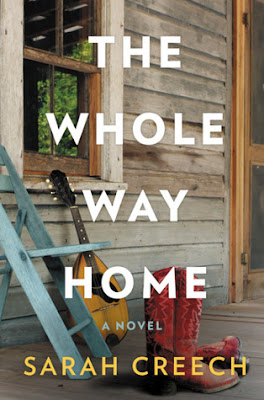 A ferocious talent on the brink of making it big in Nashville must confront her small town past and an old love she’s never forgotten in this engaging novel—a soulful ballad filled with romance, heartbreak, secrets, and scandal from the author of Season of the Dragonflies.

Playing to packed houses while her hit song rushes up the charts, country singer and fiddler Jo Lover is poised to become a big Nashville star like her idols, Loretta, Reba, and Sheryl. To ensure her success, Jo has carefully crafted her image: a pretty, sassy, down-to-earth girl from small-town Virginia who pours her heart into her songs.

But the stage persona she’s built is threatened when her independent label merges with big-time Capitol Records, bringing Nashville heartthrob JD McCoy—her first love—back into her life. Long ago Jo played with JD’s band. Then something went wrong, they parted ways and took their own crooked roads to stardom. Now, Jo’s excited—and terrified—to see him again.

When the label reunites them for a show, the old sparks fly, the duet they sing goes viral, and fans begin clamoring for more—igniting the media’s interest in the compelling singer. Why is a small-town girl like Jo so quiet about her past? When did she and JD first meet? What split them apart? All too soon, the painful secret she's been hiding is uncovered; a shocking revelation that threatens to destroy her reputation and her dreams. To salvage her life and her career, Jo must finally face the past—and her feelings for JD—to become the true Nashville diva she was meant to be.

This one went off the rails! The beginning was actually okay for me - the premise intrigued me because I LOVE the movie The Thing Called Love and I love Nashville even though I don't really give a lick about country music.  This sounded like a pretty epic second chance romance from its description and it started off that way . . . and then, this whole other story line popped up and divided the attention of this book.  I liked both threads and thought each of them would have made its own book fairly well but putting them together just confused me and made this book way too long.  It got to a point where the characters were making these off the wall decisions and I just couldn't turn another page.  I think this one would have worked a lot better with some editing and attention to either one of the stories but not both and not together.

The Whole Way Home comes out next month on June 6, 2017, and you can purchase HERE. While this definitely didn't work for me, I hope you have better luck!

J.D. told the crowd, "I guess my fiddle player just showed up."

She laughed, and it was like nothing he'd heard before. She laughed without hesitation, without boundaries. It made him lean closer to her. Her laugh was a magnet. She stepped right in front of him and spoke into the microphone. "Hi there. So sorry I'm late. Got snagged in a potato sack."

The crowd laughed too and clapped. They were drawn to her, that much was clear. More people took a sat in the bleachers. Jo's hair smelled like a summer ripe cucumber cut straight from the vine. Copperheads and rattlesnakes smelled that way too--it's how you knew they were near. Jo was so beautiful that looking at her felt like poison.

To the crowd he said, "Let's try this one more time."

Jo began tapping her boot and watched him for the start.

J.D. was certain her loved her the moment she made that fiddle cry.