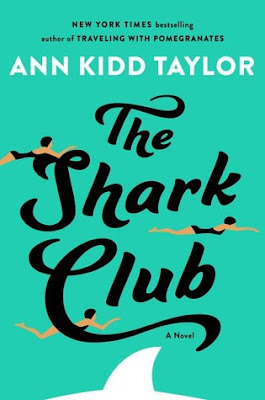 A novel about love, loss, and sharks by the New York Times bestselling coauthor of the memoir Traveling with Pomegranates.

On a summer day on the Gulf of Mexico in 1988, two extraordinary things happen to twelve-year-old Maeve Donnelly. First, she is kissed by Daniel, the boy of her dreams. Then, she is attacked by a blacktip shark.

Eighteen years later, Maeve is a world-traveling marine biologist studying and swimming with the very animals that once threatened her life. Known among her peers as the “shark whisperer,” Maeve is fearless in the water. On land, however, Maeve is dogged by unresolved wounds and indecisive about the path her life will take. After a particularly inspiring assignment abroad, Maeve returns to the small island off Florida’s coast where she grew up and to her childhood home—the legendarily charming and eccentric Hotel of the Muses, where she was raised by her grandmother. There, she is greeted by troubling news.

An illegal shark-finning operation has moved into town, and hundreds of sharks are dying. As Maeve fights to protect the fate of the animals so dear to her heart, she finds that her twin brother may be about to make it big as a novelist, using her love life as his jumping-off point. Will she confront her feelings about her brother’s betrayal—and forgive her childhood sweetheart, Daniel, the missteps of their youth? Or will she dive headlong back into her work and open her heart to Nicholas, her colleague who shares her passion for the ocean?

Set against the intoxicating backdrop of palm trees, blood orange sunsets, calypso bands, and key lime pies, The Shark Club is a love story, an environmental mystery, and an exploration of a woman’s mysterious kinship with the sea and the sharks that inhabit it.

The premise of this one was interesting - Maeve, bitten by a shark as a child, turns her fear into an obsession and travels the world studying sharks.  Her "home" is the hotel she grew up in with her twin brother and the book starts as she returns from one of her expeditions to find everything at the hotel turned upside down.  There were a lot of threads in this one -- her childhood sweetheart, her research, a new shark finning operation that threatens her home, and her twin brother.  I don't think that there were too many thread necessarily but what bothered me most about this book was plot related rather than technical.  Without giving too much away, the vast majority of the book is spent on Maeve reuniting with her childhood sweetheart after many years and a horrible break-up.  They return to each other as she returns home and most of the book involves them interacting in some way.  And, then, toward the end of the book, she walks away from this and is back to researching and someone else.  It just seems like  an odd dichotomy and i'm not sure why so much time and space of the book was devoted to letting us think her heart was somewhere else.  That said, the discussions on sharks and shark finning was interesting, if not the most compelling to me.  This book had a lot going on and it didn't quick work for me.  You may have better luck!

The Shark Club comes out next month on June 6, 2017, and you can purchase HERE.


"You remember when we met?" he asked.

"It was in the hallways of the dorm, the day I got her.  You said, 'You're the shark person,' and then you eyeballed my scar and used it as a quasi scale to estimate the force of the shark's bite."

"Right. I calculated the shark that bit you did so very, very hard."

He went on. "I went to my room after that and thought: she was literally bitten by the object of her obsession. That made you the single most fascinating person I'de ever met."