Review: The Duke of Bannerman Prep by Katie A. Nelson 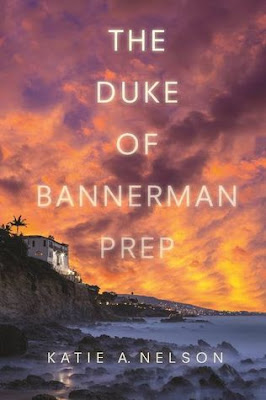 The Duke of Bannerman Prep by Katie A. Nelson

Words are weapons. Facts can be manipulated. And nothing is absolute—especially right and wrong.

Tanner McKay is at Bannerman Prep for only one reason: the elite school recruited him after he brought his public school’s debate team to victory last year. Bannerman wants a championship win. Debate is Tanner’s life—his ticket out of his poor-as-dirt life and family drama, straight to a scholarship to Stanford and the start of a new, better future.

But when he's paired with the Duke, his plans for an easy ride seem as if they’ve hit the rails. The Duke is the quintessential playboy, beloved by everyone for his laissez-faire attitude, crazy parties, and seemingly effortless favors.

And a total no-show when it comes to putting in the work to win.

But as Tanner gets sucked into the Duke’s flashy world, the thrill of the high life and the adrenaline of existing on the edge becomes addictive. A small favor here and there seems like nothing in exchange for getting everything he ever dreamed of.

But the Duke’s castle is built on shady, shaky secrets, and the walls are about to topple down.

A contemporary retelling of The Great Gatsby, Katie Nelson’s taut debut is perfect for fans of John Green’s Looking for Alaska, Kate Brian’s Private series, and anyone who’s encountered the cut-throat world of competitive high school.

I universally love books with a boarding school setting and this one was no different. I also usually like retellings and I'd never read a retelling of The Great Gatsby before, let alone a YA retelling.  It was well imagined and well executed in story if not in words. The other great part of this book was its immersion into high school speech and debate - I competed (badly) in these events in high school and I found this book to be so true and accurate to that life! It definitely brought me back. However, the real star of this book was Tanner - the MC and such a complex and well developed character.  The entire book was told from his POV and it worked well.  he was far from perfect but I found his internal struggles and decisions realistic for his age.  This book had a lot of facets but somehow they worked well.  I look forward to reading more from this author in the future.

The Duke of Bannerman Prep comes out next week on May 9, 2017 and you can purchase HERE. I definitely recommend this one if you like YA retellings or if you're a fan of The Great Gatsby - this was a unique twist and I enjoyed it.

Tomas shook his head. "We're good. How did you get here? You drive that Bronco?"

I nodded. My truck was a constant source of amazement of these people. They couldn't fathom that anything worth less than ten thousand dollars could still run.

"I don't know how you drive that thing, dude. Doesn't sitting in it make you want to join the NRA, stuff some dip in your cheek and marry your cousin?" The girl standing next to him laughed, despite her shivering. Tomas noticed Abby. "We meet again. You going to introduce me this time?"

"No way," he doubled over, spilling some of his beer onto the deck. "I gotta tell the guys." He pulled the girl along with him and walked toward the house.