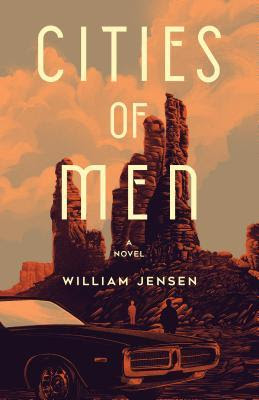 Cities of Men by William Jensen

In 1987, twelve-year-old Cooper Balsam's mother, Arden, disappears without a trace. Cooper's father, Percy, a Vietnam veteran struggling with PTSD, doesn't seem too concerned. "This isn't the first time. She's done it before." As days pass, Cooper begins to act out and withdraw from the world, and his growing animosity toward his father's ambivalence begins to escalate even as Percy and Cooper begin to actively search for the woman in their lives. From the hills of Southern California, to the deserts of Arizona, and down to the beaches of Mexico, the father and son will look for someone who may not want to be found for reasons they don't yet understand.

I'm not sure how I feel about this book, even a few days after I've read it.  It was a quick read but I was still expecting more.  This is a just a glimpse of a few months in a twelve year old's life and, yes, it was likely the most important thing to happen to this person but I'm not sure it was the stuff that books are made of.  What I'm trying to say is that I'm not sure it is enough to have this micro-focus on a twelve year's mother leaving and the ensuing but short-lived search for the same. But even considering this criticism, and I am still on the fence about being critical of this hyper-focus, Cooper was well written - he seemed like this age and all of his confusion, his intense feelings and his struggle were very genuine and written perfectly.  If you are looking for a book in which the author explores and writes a wonderful 12 year old MC and to feel like you are that age again, this might just be the book for you.

Cities of Men comes out later this month on May 23, 2017, and you can purchase HERE.


I realized early on that my parents were people, individuals with histories from long before I was born. Obviously, everyone understands this, but I knew it almost from the beginning. I knew my parents had backstories, some I'd never know, and I had to be okay with that. There wasn't anything I could do about it if I wasn't anyway.

I thought about this, all of this, that night as I stood outside staring at the empty roads and the night sky. I wondered about my parents and their lives and the secrets of everyone else, the people in all of the houses, everybody sleeping, dreaming, their joys and regrets. I stood there and waited for Mom. I waited a long time.