Review: Wrong Brother, Right Match (Anyone But You #3) by Jennifer Shirk 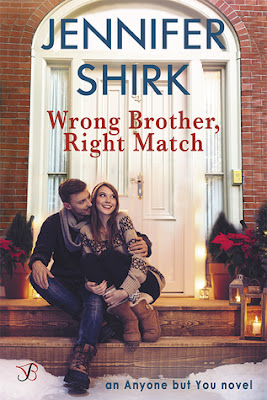 Wrong Brother, Right Match (Anyone But You #3) by Jennifer Shirk

Matchmaking guru Kennedy Pepperdine’s life is perfect. Perfect job. Perfect friends. Perfect boyfriend. Except...when she gets trapped in an elevator with a handsome stranger, she accidentally confesses a secret: maybe her perfect boyfriend, Justin, isn’t so perfect for her after all. But a matchmaker should be able to successfully match herself, right? Thankfully, she’ll never see the handsome stranger again. Until she heads home with Justin for the holidays and learns that the sexy stranger is none other than Justin’s older brother, Matt.

Matt Ellis is trying to be on his best behavior for his mother—it is Christmas, after all. But when he recognizes the beautiful woman from the elevator—the one he hasn’t been able to stop thinking about for months—his best behavior is being held by a thread. Matt’s always sacrificed for his family, and nothing is more important than their happiness, but the more time he spends around Kennedy, the more he wonders if her supposed "right match" might just be the wrong brother.

This was fine - nothing special but nothing too offensive.  Not very memorable, either.  The premise is cute and the book definitely follow the premise but it was missing that spark, that something special that turns an ordinary contemporary romance into something you love.   I don't think Kennedy was particularly well developed as a character; everything was incredibly superficial in this book from the characters to the romance.  Even by the end, it just seemed to be scratching the surface.  This one actually might translate better to a Hallmark or Lifetime movie but as a read, it left a bit to be desired. This is also novella length, which I feel made everything seem a bit rushed in the book. Still, if you want a short holiday romance that is light on the drama (especially considering the premise) but is cute, this may work a lot better for you.

Wrong Brother, Right Match comes out soon on December 5, 2016, and you can purchase HERE.