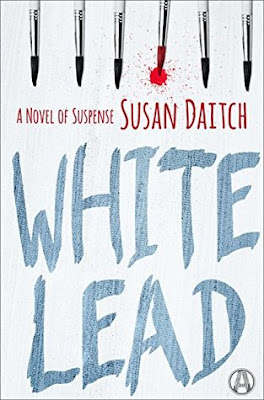 As a night owl, Stella Da Silvera appreciates that Claiborne’s Auction House allows her to keep an unconventional schedule. Natural light can damage priceless works of art, and besides, Stella’s concentration improves after hours.

One night, while working on a seventeenth-century painting by Diego Velázquez, Stella hears screams from the office of Claiborne’s curator Jack Ashby. She tries to investigate, but when the noise fades away, she heads back to her studio—where she finds a dead body and a man with a tattooed face who isn’t happy to have company. After eluding the unsavory character, Stella returns with the police, only to find the corpse—and the Velázquez—gone.

With no murder in evidence, the detectives turn their attention to the missing canvas. They figure Stella had access and opportunity, making her a prime suspect. Adding insult to injury, Claiborne’s cans her for negligence. To save her reputation, Stella has no choice but to find the painting. Turns out, someone else is looking for her.

First, this read as more of a cozy mystery than a tale of suspense.  It started off well enough - interesting, even - in its descriptions of art conservation. It was very detailed in it descriptions of chemistry and paint mixing and how ancient colors were formed and how these are used and/or replicated in conservation (and never restoration). Of course, the rest of the book was an .  At some point, the narrator/MC has skills that she's obtained through the years that don't make a lot of sense - we are supposed to accept these revelations of fact. What happens to this woman (violent and repeated beatings and escapes at the hands of dangerous criminals) just seemed to defy logic at some point -- she's an art conservator, not ex-police or military. I found myself skimming toward the end because I just wanted to be done -- this seemingly went on forever and the mystery when unveiled didn't make a lick of sense to me. It was so discombobulated by that point that I simply didn't care. Hopefully you have better luck with this one!

White Lead comes out today November 15, 2016, and you can purchase HERE.


I whispered scenes to Marnie that I thought she'd find comforting. The feeling of coming indoors out of a freezing Chicago wind and wrapping your hands around a cup of hot chocolate laced with rum, ginger, and black pepper. The sounds of cicadas on a summer night. Going to see the Pacific Ocean, one of the first things he or I did when we traveled to the West Coast.