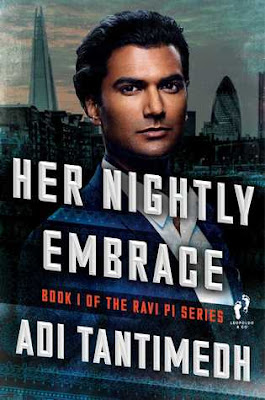 The first in a trilogy of whip-smart novels—currently in development as a TV series set to star Sendhil Ramamurthy (NBC’s Heroes and Heroes Reborn)—about a destructive private investigator and his eccentric coworkers, who handle cases so high-profile that they never make the headlines.

Ravi Chandra Singh is the last guy you’d expect to become a private detective. A failed religious scholar, he now works for Golden Sentinels, an upmarket London private investigations agency. His colleagues are a band of gleefully amoral and brilliant screw-ups: Ken and Clive, a pair of brutal ex-cops who are also a gay couple; Mark Chapman, a burned-out stoner hiding a great mind; Marcie Holder, a cheerful former publicist; Benjamin Lee, a techie prankster from South London; David Okri, an ambitious lawyer from a well-connected Nigerian immigrant family; and Olivia Wong, an upper-class Hong Kong financial analyst hiding her true skills as one of the most dangerous hackers in the world—all under the watchful eye of Roger Golden, wheeler-dealer extraordinaire, and his mysterious office manager, Cheryl Hughes.

Thrust into a world where the rich, famous, and powerful hire him to solve their problems and wash their dirty laundry, Ravi finds himself in over his head with increasingly gonzo and complex cases – and the recent visions that he’s been having of Hindu gods aren’t helping. As Ravi struggles to stay ahead of danger, he wonders if the things he’s seeing are a delusion – or if he might, in fact, be an unrecognized shaman of the modern world...

So I'm not sure why these little stories were even made into a book.  When I requested this, I assumed it was a novel and the start of a series. Instead, we get four mini stories that really read better as episodes of the TV show that has been developed based on these characters.  I also hesitate to call these character PIs - they reminded me much more of the Olivia Pope team from Scandal -- they are, essentially, cleaners.  While I did like the diversity of these stories and could see myself liking this show because Ravi is a compelling character, the writing of these actual mini stories was elementary and pedantic -- better served as an idea for the screenplay than enjoyable reading.  I do look forward to the show but I would skip the book in its favor.

Her Nightly Embrace came out last week on November 1, 2016, and you can purchase HERE.


Roger didn't hire cream puffs. If there was one thing that I had learned about my coworkers, it was that everyone here was a brilliant fuckup with nowhere else to go. And fuckups are dark, dark people. We're all good at smiling, wearing a smart suit we got from our clothing allowance and presenting a cool front, but the clients should never see how ewe got our results, or how we behave off-hours.