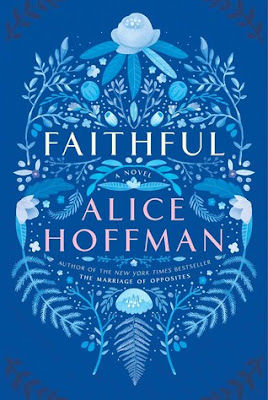 Growing up on Long Island, Shelby Richmond is an ordinary girl until one night an extraordinary tragedy changes her fate. Her best friend’s future is destroyed in an accident, while Shelby walks away with the burden of guilt.

What happens when a life is turned inside out? When love is something so distant it may as well be a star in the sky? Faithful is the story of a survivor, filled with emotion—from dark suffering to true happiness—a moving portrait of a young woman finding her way in the modern world. A fan of Chinese food, dogs, bookstores, and men she should stay away from, Shelby has to fight her way back to her own future. In New York City she finds a circle of lost and found souls—including an angel who’s been watching over her ever since that fateful icy night.

Here is a character you will fall in love with, so believable and real and endearing, that she captures both the ache of loneliness and the joy of finding yourself at last. For anyone who’s ever been a hurt teenager, for every mother of a daughter who has lost her way, Faithful is a roadmap.

I didn't know what to expect with this one going in and I think that's the best way to read this.  I wouldn't say that this is magical realism, necessarily, but it is a bit mystical.  It's a fast read and you will be in Shelby's head for the entire book.  This isn't a bad thing - I liked Shelby and I think she is a very well-developed character.  Her motivations, even if odd, were explained and there is a light for her through the heart of the book - a constant way forward.  That being said, this was very sad and melancholy - so much bad in this world. This was my first book by this author but certainly will not be my last -- I liked the way she told this story and I'm curious about her other works. One thing that didn't work for me in this book was that it was a bit repetitious and it meandered a bit, even though it's not long. I still would recommend this, though, to fans of inspirational and/or spiritual fiction.

Faithful came out earlier this week on November 1, 2016, and you can purchase HERE.

There are dozens of high school girls who lock themselves in their bedrooms on the anniversary night, their hands dusted with luminous sand, prayers on their lips, their hearts heavy with sorrow. Each one thanks her lucky stars she is not Helene, even though Helene was the beautiful girl who could do as she pleased, the one every boy wanted to date and every girl wanted to be like. But that was then.