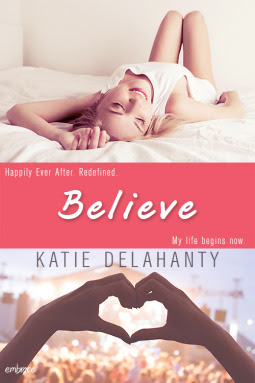 Believe (The Brightside #3) by Katie Delahanty

My name is Amanda Conrad and I. Am. A doctor.

When my cousin Liv whisked me away to South Africa to be maid of honor in her super-secret celebrity wedding, I was about to begin a five-year residency at NYU and was on my way to becoming a plastic surgeon. My plans definitely did not include a rock-star best man sweeping me off my feet.

But what happened in South Africa needed to stay there—he’d return to his touring and I’d start my residency, with our fond memories of a whirlwind, fairy-tale week. But now nothing feels right—I’m questioning my once solid plans, and I can’t stop thinking about him. Our lives are so different… Am I ready to risk everything I’ve worked for since I was thirteen—and put my heart on the line? To dream bigger than I ever thought possible? To believe I can have it all? That’s the thing about growing up...sometimes you have to be brave enough to redefine happily ever after.

This is the third book in this series although it could be read as a standalone (note, however, that the first two are definitely a duo to be read together and in order). And yet, the same magic from the first two books continues in this one as well!  I love love love Amanda -- we'd gotten to know her a bit in the first two books as being a sounding board for Liv but being inside her head felt so real. And I feel the same re: Matt.  We knew him a bit from the first two books but we really get to know him in this one.  The settings were so fun, too -- from Africa and its magic for the wedding to NYC where both Amanda and Matt have just moved for different reasons to being on the road together while Matt tours.  Having been on the road before with a band, I can tell you that this was accurate and nostalgic and fun.  I liked that this wasn't too serious because I was in the mood for that -- it was a bit more about trust and self-discovery but the romance was super cute as well.

I really think this is such a fun and funny underrated contemporary romance series -- bonus points if you like rockstar romance, too! Believe comes out today on October 24, 2016, and you can purchase HERE.

"What is it really about?"

He thinks for a moment before responding with a smile. "I'll never tell."

"I learned that from Berkeley. As a writer, once a song is released it's not yours anymore. It belongs to the listener. I don't want to change it for you; it could ruin it. Music is memories; it can transport you back in time, and that song is a moment for me--it's what I needed then-- just as it became for you what you needed then. It's yours."