Review: The Apartment by S.L. Grey 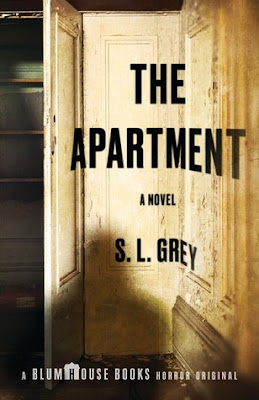 The Apartment by S.L. Grey

A high-concept psychological chiller about a troubled married couple on a house swap from hell. An Anchor Original.

Mark and Steph live an idyllic life with their young daughter in sunny Cape Town until one day when three men in masks violently break in. Traumatized but physically unharmed, Mark and Steph are unable to return to normal and are living in constant fear. When a friend suggests they take a restorative vacation abroad via a popular house-swapping website, it sounds like the perfect plan. They find a nice artistic couple with a charming apartment in Paris who would love to come to Cape Town. How could Mark and Steph resist the idyllic, light-strewn pictures, and the promise of a romantic getaway? But once they arrive in Paris, they quickly realize that nothing is as advertised. As their perfect holiday takes a deadly turn, the cracks in their relationship grow ever wider and dark secrets from Mark’s past begin to emerge.

Deftly alternating between two complex and compelling narrators, The Apartment is a terrifying tour de force of horror, of psychological thrills, and of chilling suspense.

I'm telling you right now - please don't read this. I had seen some other reviewer's opinions (that I trust) on this one before I read it that were less than stellar but I still wanted to give this its fair shot; I wish I hadn't. I almost DNF'd but I was intrigued enough to want to know the "twist" or mystery but now I can confidently tell you that this was not worth finishing. Maybe the story for this book seemed like it a good idea for a book at one point but either the author did not really want to finish the book or there was a critical lack of editing involved in the execution.  THere were so many sub-stories that were glossed over and made to seem important but ended up being red herrings to the actual plot. And I'm not talking just a few of these but four or five of these, maybe more.  I also have severe issues with the "twist" - it didn't make any sense and it wasn't properly flushed out to even give a hint that anyone could suspend their disbelief. And the characters? First, they were supremely unlikeable -- that, I could get over -- but they were also so not developed.  You can't imagine why Mark and Steph are a couple now or why they ever were.  There was also this weird focus on the problems with their relationship that added nothing to the plot, depth or story. This one did not work for me in any way.

The Apartment came out earlier this month on October 4, 2016, and you can purchase HERE.

I pull the plug and gather the toys and put them in the bucket at the corner of the tub. I pick out the soap and turn on the hand shower to rinse the tub. The water's draining slowly, blocked by Hayden's hair in a drain hole. I pick it out and it comes away in a satisfying mat; it shines with a blue gleam, full of life.  I can't bring myself to throw it away so I squeeze the water out and take it with me.