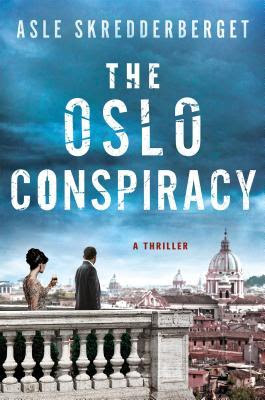 The Oslo Conspiracy by Asle Skredderberget, Translated by Paul Norlén

The main character in Asle Skredderberget´s crime novels is Milo Cavalli. Half Norwegian and half Italian, he is definitely not your typical depressed Nordic noir investigator. In fact he´s quite the opposite. Milo is successful and attractive AND extremely rich. He goes to confession. He worries about his friends and family. And he taps into his family fortune whenever he needs to in order to crack the case he's working on.

In The Oslo Conspiracy, a scientist is found dead in a hotel room in Rome. Before she is strangled, she manages to scribble a few words on a piece of paper.

Milo Cavalli is sent to help out with the investigation in Italy, since he is familiar with Italian red tape. Milo finds the note from the scientist, and he also learns that earlier her kid brother had been executed by gang members in a schoolyard.

Milo becomes obsessed with finding out if there is a link between the two killings--the sister strangled in Italy and the brother shot in Norway. And he is willing to use his vast fortune and special connections—especially when those connections involve beautiful women-- to find the answers.

A new twist in thrillers, The Oslo Conspiracy is certain to captivate readers who like their heroes rich, handsome, caring, and very, very sexy.

This is the English debut of what I gather to be a popular Norwegian crime thriller/mystery series starring the dashing Milo Cavalli.  Milo Cavalli is a half-Italian/half-Norwegian financial crimes detective  in Oslo who has left a successful career behind in the financial sector (although he is still plenty wealthy as he continually tells us) to give back to the community in the form of being a policeman.  And while I didn't mind Milo and his rather sleazy yet self-righteous and entitled attitude, I was bored with this 'thriller'.  There were so elements and outrageous connections between several different people and crimes that I not only had a hard time keeping track but I was unable to suspend my disbelief to find this to be a viable or worthy story.  I don't think I will read more books in this series, assuming they will also be translated, because the thriller aspect was missing for me.  It was really more of a police procedural, to be sure, but I can't even tell you that that part of the book was done well. The setting was okay -- from Rome to Oslo to New York -- but not enough to make me excited to read more.

The Oslo Conspiracy comes out today on October 25, 2016, and you can purchase HERE.


Not much of what his father had said to him while he was growing up had stuck, but one of his sayings had.