Review: The Last One by Alexandra Oliva 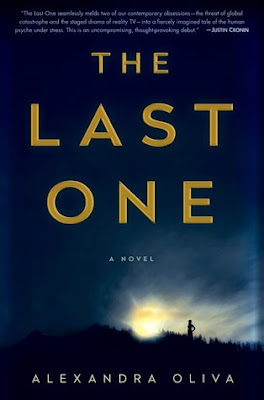 The Last One by Alexandra Oliva

Survival is the name of the game as the line blurs between reality TV and reality itself in Alexandra Oliva’s fast-paced novel of suspense.

She wanted an adventure. She never imagined it would go this far.

It begins with a reality TV show. Twelve contestants are sent into the woods to face challenges that will test the limits of their endurance. While they are out there, something terrible happens—but how widespread is the destruction, and has it occurred naturally or is it man-made? Cut off from society, the contestants know nothing of it. When one of them—a young woman the show’s producers call Zoo—stumbles across the devastation, she can imagine only that it is part of the game.

Alone and disoriented, Zoo is heavy with doubt regarding the life—and husband—she left behind, but she refuses to quit. Staggering countless miles across unfamiliar territory, Zoo must summon all her survival skills—and learn new ones as she goes.

But as her emotional and physical reserves dwindle, she grasps that the real world might have been altered in terrifying ways—and her ability to parse the charade will be either her triumph or her undoing.

Sophisticated and provocative, The Last One is a novel that forces us to confront the role that media plays in our perception of what is real: how readily we cast our judgments, how easily we are manipulated.

This is a book where, even by the end, I'm not sure I was really into it -- I had a lot of moments of considering a DNF but I kept reading.  Although I had a hard time being engaged, I do think this was well done and it will appeal to a certain reader (more on that below).  I was hoping for a bit more tension but it only came in spurts -- the survival part was interesting to me and this was also told intercalary so what actually is happening is only hinted at and you're left to figure it out (which you will).  I just don't have a lot to say about this book -- the premise is good, the ideas were interesting, it had the ability to be compelling and seemed accurate, I just didn't love it.  Sometimes why you didn't ultimately love a book is something that's hard to articulate, especially when there is nothing glaring in terms of plot or writing but that was just the case here.

This is a mash-up between the TV show Survivor, the actual Hunger Games and Station Eleven.  Certain fans of any of those could really like this! The Last One came out earlier this month on July 12, 2016, and you can purchase HERE.

For a moment, I'll just stand there, looking.  Taking in the sight of so many familiar faces, the face of the man I love.  The person who taught me what it was to be honestly generous, to give without expectation or resentment.  Whose steady demeanor and realism helped me to learn that attempting to achieve perfection with every decision is a sure path to unhappiness; that when it comes to choosing a house or a car or a television or a loaf of bread, good enough really is good enough.  Whose cereal-slurping helped me learn that being irritated at someone isn't the same as ceasing to love him, a distinction that I know should be obvious but which has always troubled me.  Who taught me that together is better than alone, even if it's sometimes harder, even if I sometimes forget.