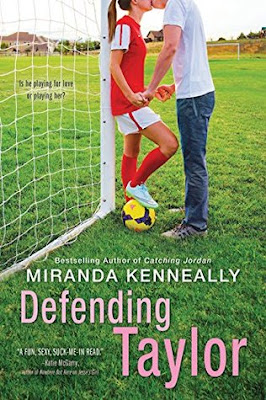 Captain of the soccer team, president of the Debate Club, contender for valedictorian: Taylor’s always pushed herself to be perfect. After all, that’s what is expected of a senator’s daughter. But one impulsive decision—one lie to cover for her boyfriend—and Taylor’s kicked out of private school. Everything she’s worked so hard for is gone, and now she’s starting over at Hundred Oaks High.

Soccer has always been Taylor’s escape from the pressures of school and family, but it’s hard to fit in and play on a team that used to be her rival. The only person who seems to understand all that she’s going through is her older brother’s best friend, Ezra. Taylor’s had a crush on him for as long as she can remember. But it’s hard to trust after having been betrayed. Will Taylor repeat her past mistakes or can she score a fresh start?

I'm a bit worried -- this used to be one of my all time favorite series but the past two books in it have just been just okay for me.  Books 1-5 were five stars for me and just so, so good but I have been a bit underwhelmed by both last year's release and this year's, Defending Taylor.  I think what was different for me with this book versus the other books in the series that I loved is that I felt a lack of understanding in the romance -- it seemed like so much tell rather than show and I've never had that problem with this series before.  This should have been a slam dunk for me since I love politics and I played soccer for 14 years but it just felt off; I didn't enjoy reading it. Don't get me wrong, I still think MK writes absolutely amazing female characters and I think every teen should read this series -- all of the books feel realistic in their characters, in their plot and in the situations; this series is also one of the best examples of honestly dealing with sex in YA.  That being said, I don't think we were given enough info about why Taylor was so interested in either her ex boyfriend or Ezra and vice versa -- snippets of scenes between them were recounted by I was missing that spark. The rest of the book outside of the romance worked for me because it felt so genuine, another thing I love about this series, but the romance was a pretty big part of this book.

For me, I feel a bit like the author should take a break from this series but I know a lot of people loved the release last year, Jesse's Girl, and will probably love this one, too.  I just wanted something more. Defending Taylor comes out next week on July 5, 2016, and you can purchase HERE.

My first class is calculus 1, the most advanced math course Hundred Oaks offers.  Just a week ago, I was taking an advanced calculus quiz at the University of the South.  St. Andrew's is one of the best prep schools in the country, and they offer seniors the opportunity to take courses at the university, which is up the road.  Even thought I was still in high school, the professors treated me just like a college kid.  I was only in the course for two weeks, but still.  It was insanely difficult.  The truth is, unlike everyone else in my family, I hate math.  I have to work at it harder than anything else in my life.