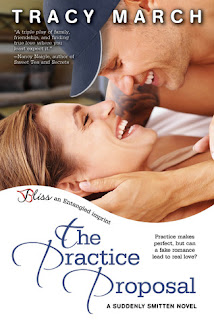 The Practice Proposal (Suddenly Smitten, #1) by Tracy March Obtained for Review via NetGalley

Liza Sutherland isn’t looking for love. Not from a charity-auction date she didn’t even bid on and especially not with Nationals first baseman Cole Collins, the guy she obsessed over as an awkward teenager. She won’t get involved with a notorious player, no matter how attractive Cole is.
Cole Collins is up for contract renegotiation, but after too many late-night parties, he’ll need some positive publicity before he can make the roster. His agent, Frank, pitches Liza as the perfect prop…only Cole didn’t account for Liza no longer being just a teenager with a crush. She’s gorgeous and smart and he’s instantly hooked.
When Frank makes Liza a deal she can’t refuse—a bet she will fall in love with Cole or a cool half mil goes to charity—the game is on. But neither bet on the real feelings that surface. Could a fake fling turn into an official forever

Liza has is still mourning the death of her fiance two years ago when her mom bids on a charity auction for a date for Liza with the hottest baseball player on the rival team, Cole Collins. Even for someone that is not necessarily a huge baseball fan, this romance was very cute! Liza and Cole knew each other when Liza was an awkward teen and Cole was attending her family's baseball camp. Of course, Liza is all grown up now and definitely not looking for romance. Cole has been in trouble with his team for his partying ways and needs to show he has settled down going into the playoffs and angling for a new contract. Not only do Liza's parents own the rival team to Cole's baseball team but there is also a past with Cole and Liza's parents because Cole thought he would be drafted by Liza's dad. Despite everything, however, there is a truly old-fashioned and romantic courtship between Liza and Cole -- along with a few twists!
I highly recommend this to anyone that likes cute, sweet and clean romances, even better if you like sports themed romances. Liza and Cole were really cute together and I really liked the baseball rivalry aspect.