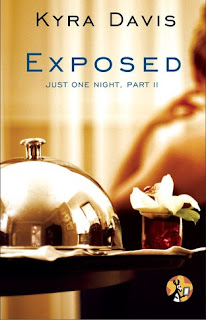 Part 2 of the Just One Night series. One passionate night with a stranger turned Kasie’s world upside down, and just when she thought she was getting the hang of things, her fiancé finds out...
You should sleep with a stranger —those words whispered in her ear by her best friend became a challenge Kasie took to heart. Suddenly, the man who gave her the most shocking pleasure in that upscale Vegas hotel —a man whose name she never bothered to find out —is her company’s biggest client.
As this unknown man becomes Mr. Dade at the office, and Mr. Dade becomes Robert in the bedroom, Kasie’s passion won’t let her deny him anything he wants. But when her fiancé, Dave, finds out, there’s no telling what he will do to keep her, or what Robert will do to steal her away once and for all.

You can read my review of The Stranger (Just One Night, Part 1) here. I was definitely intrigued by the first book although there were some definitely concerns for me. Unfortunately, the second book started out well but did not catch fire. I'm not sure exactly where the story is going now...and if I even want to find out.
In the second book of this series, Kasie is even more confused about what she wants. I don't want to give anything away because there is definitely a lot of anticipation in most of the second book, waiting to find out what Kasie's fate will be with her fiancé. However, the resolution of what was at first written to be a very serious situation left me unsatisfied. It was resolved too easily and too quickly for a situation that was so built up.
I was also incredibly disheartened by the way Kasie was treated, both by Robert and her fiancé. It was cruel and sad no matter the resolution. I'm also not sure if it was in her fiancé's character's nature that was described in the first book. The second book just feels disjointed -- it does end with a cliffhanger but it is one that Kasie self imposes. We will have to see if the third book neatly wraps things up or has anything to offer . . .