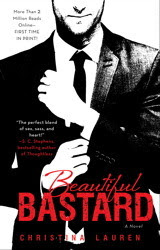 An ambitious intern. A perfectionist executive. And a whole lot of name calling. Discover the story that garnered more than two million reads online.
Whip-smart, hardworking, and on her way to an MBA, Chloe Mills has only one problem: her boss, Bennett Ryan. He’s exacting, blunt, inconsiderate—and completely irresistible. A Beautiful Bastard.
Bennett has returned to Chicago from France to take a vital role in his family’s massive media business. He never expected that the assistant who’d been helping him from abroad was the gorgeous, innocently provocative—completely infuriating—creature he now has to see every day. Despite the rumors, he’s never been one for a workplace hookup. But Chloe’s so tempting he’s willing to bend the rules—or outright smash them—if it means he can have her. All over the office.
As their appetites for one another increase to a breaking point, Bennett and Chloe must decide exactly what they’re willing to lose in order to win each other. Originally only available online as The Office by tby789—and garnering over two million reads on fan fiction sites—Beautiful Bastard has been extensively updated for re-release.

Another Twilight fanfic turned book that's supposed to not be fanfic. I think the dedication to SM really threw me off and I couldn't help but compare this to 50 Shades, which I didn't like at all. However, I did like Bennett Ryan (the "Edward" character) much more than Christian Grey and the sex scenes were much hotter than 50 Shades. That being said, there was a sex scene in every chapter and . . .not much else.
There was absolutely no character development, no reason or thought given at all as to why Bennett and Chloe ended up liking each other enough to be together at the end...it really was one long sex scene after another, interspersed with some "I hate yous" for good measure.
At least this was a fast read because there was no plot and no character development -- it didn't drag but it kind of felt like, what's the point.