Review: The Last Night at Tremore Beach by Mikel Santiago 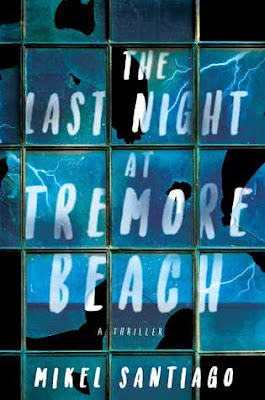 The Last Night at Tremore Beach by Mikel Santiago

What starts out as an idyllic summer holiday on the Irish coast soon becomes a living nightmare with unpredictable consequences for a world-renowned composer and his family in this chilling psychological thriller.

Recently divorced and in the middle of a creative crisis, Peter Harper decides to take shelter on Ireland’s scenic and isolated Tremore Beach. But after he is struck by lightning one stormy night, he begins experiencing terrible headaches and strange dreams. As the line between his dreams and reality begins to blur, Peter realizes that his bizarre dreams may be a warning of horror still to come…

Guys, I just didn't like this one.  Almost the entire time I vacillated between DNF and not.  I also found myself skimming the last 30% like whoa, I just wanted this to be over. This was supposed to be some sort of thriller but it was really just about Peter, who was supremely unlikable and self-absorbed, and his "premonitions." The blurb is accurate - poor famous Peter moves to the remote coast of Ireland, gets struck by lightning and then starts having horrible dreams that he interprets as premonitions of violence to come.  I won't tell you the ending but this book was just so disappointing - no depth, so many tangents and frankly, kind of boring.  There are so many better options out there that I would skip this one.

The Last Night at Tremore Beach came out earlier this month on February 14, 2017, and you can purchase HERE. Hopefully you have better luck with this one than I did!

I closed my eyes, and could see the vision so clearly in my mind. Even nightmares had a way of fading with the morning, becoming a vague recollection that evanesced in the coming hours o days. But no this one. This image was fresh and clear in my mind. This was no simple nightmare.