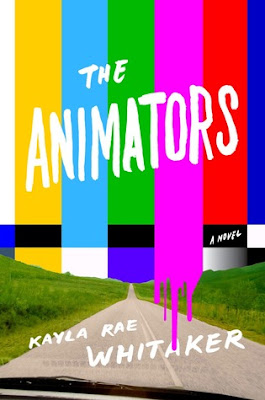 The Animators by Kayla Rae Whitaker

She was the first person to see me as I had always wanted to be seen. It was enough to indebt me to her forever.

At a private East Coast college, two young women meet in art class. Sharon Kisses, quietly ambitious but self-doubting, arrives from rural Kentucky. Mel Vaught, brash, unapologetic, wildly gifted, brings her own brand of hellfire from the backwaters of Florida. Both outsiders, Sharon and Mel become fervent friends, bonding over underground comics and dysfunctional families. Working, absorbing, drinking. Drawing: Mel, to understand her own tumultuous past, and Sharon, to lose herself altogether.

A decade later, Sharon and Mel are an award-winning animation duo, and with the release of their first full-length feature, a fearless look at Mel's childhood, they stand at the cusp of success. But while on tour to promote the film, cracks in their relationship start to form: Sharon begins to feel like a tag-along and suspects that raucous Mel is the real artist. When unexpected tragedy strikes, long-buried resentments rise to the surface, threatening their partnership—and hastening a reckoning no one sees coming.

WHOA. I almost don't know what to say about this - I seriously was not expecting it to be so dark, so shattering, so real. Those are all good things BUT I admit that I am the type of reader who has to be in the mood and/or steeled to push on with such a book.  That being said, I read this when I was decidedly in not such a mood and I still loved this.  Certain passages were soul clenching beautiful. This was not at all what I expected but perhaps it was what I needed - a reminder of life that isn't easy or linear with fits and gasps and where not everything is ok. Be forewarned, be prepared but do not let this stop you from reading something so true about coming of age, about friendship, about something you never knew about before.

The Animators comes out next week on January 31, 2017 and you can purchase HERE. I definitely recommend this one if you like something meaty and with depth about coming of age and friendship; this book is something so heart-wrenchingly true and not just hope glossed over as fact.

Because of TV, I was keenly aware that there were other places, bigger places, where words were said differently, where people moved more quickly. I imagined an outline of America with only a few bright points within, the rest a hazy, slightly sinister filler. The outline spoke very little to who I was, but God knows, volumes to who I wanted to be. Which was, in a word: elsewhere.