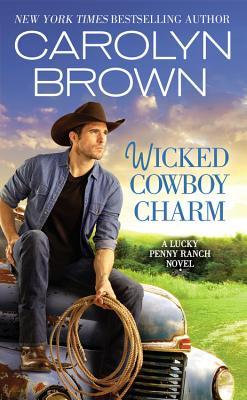 ONE BLIZZARD, ONE BUNKHOUSE, AND A WHOLE LOTTA TROUBLE . . .

Josie Dawson is new in town, but it doesn't take a local to know that Deke Sullivan is trouble—in a smokin' hot package. He's sweet, sexy, and has charmed just about every woman in Dry Creek, Texas. Well, Josie won't be next. She'll keep her distance, even if he is great with babies and makes a mean cup of homemade hot chocolate.

Deke Sullivan really is a one-woman type of guy. He just had to do a lot of looking to find that one woman. Now he thinks he's found her and he won't let a strong, sassy gal like Josie slip away. Just when he's wondering how to convince her he only has eyes for her, they get stranded in a tiny cabin during a major blizzard. If Deke can melt her heart before they dig out of the snow, he'll be the luckiest cowboy in Texas . . .

Josie could hardly take her eyes off Deke’s strong arms as he carried a pile of wood the short distance from the box to the fireplace. To have those arms around her, to cuddle up next to him on one of those bunk beds—she shook her head to get the picture out of it and reached for the tin box of matches on the mantel.
“How many do you need?” she asked.
“Just one,” he answered.
“Confident, aren’t you?”
“Not confidence, just practice, ma’am.” He got the fire going with the first one.
“Impressive,” she said.
“We’ll get it warmed up in here soon enough.”
Josie sat down on the sofa facing the fireplace and took stock of the little cabin. A set of bunk beds covered the wall to her right. A doorway into a bathroom was to her left along with crudely made bookshelves with about a hundred well-worn paperback books. A deck of cards was in the middle of a card table with a couple of folding metal chairs on either side. A second table was fitted into the small corner from the end of the bunk beds to the wall and another oil lamp had been placed in the middle of it.
“We’ll survive,” Deke said.
“Who are you trying to convince? Me or you?” Josie asked.
“Both of us. It’s better than freezing to death in our vehicles. Lord, I wish I would have turned around and gone right back home when the first snowflake hit,” he answered.
“Me too.” She threw one arm over her head and groaned.
“Top or bottom?” Deke asked.
“Well, now that depends on lots of things,” she said before she thought.
Deke whipped around, his eyes big as silver dollars. “What did you say?”
She blushed and quickly covered her blooper. “I don’t care. I could sleep right here. Maybe I’ll wake up to find this is all a dream.”
“Okay then, I’ll take the bottom bunk. Rascal gets restless if he’s not sleeping right beside the bed on his blanket or else on the foot of it. And darlin’, if you wake up and find this is a dream, don’t leave me behind.”
“No way, cowboy. You are stuck with me for the duration of this damned storm.”
“And you, darlin’, are stuck with me.”
PREORDER THE BOOK!

Carolyn Brown is a New York Times and USA Today bestselling romance author and RITA® Finalist who has sold more than 2.75 million books. She presently writes both women's fiction and cowboy romance. She has also written historical single title, historical series, contemporary single title, and contemporary series. She lives in southern Oklahoma with her husband, a former English teacher, who is not allowed to read her books until they are published. They have three children and enough grandchildren to keep them young.
Website | Facebook | Goodreads 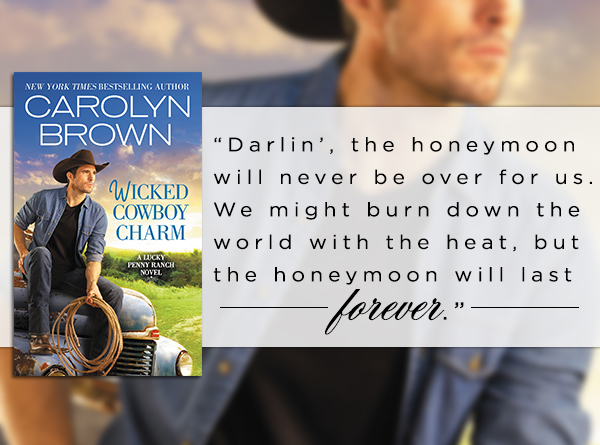