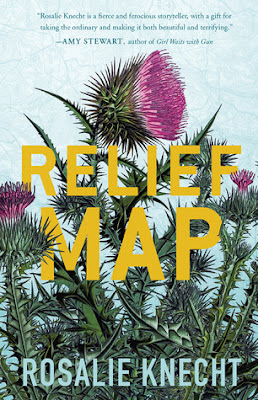 In the heat of a stifling summer in her sixteenth year, Livy Marko spends her days in the rust-belt town of Lomath, Pennsylvania, babysitting, hanging out with her best friend, Nelson, and waiting for a bigger life to begin. These simple routines are disrupted when the electricity is cut off and the bridges are closed by a horde of police and FBI agents. A fugitive from the Republic of Georgia, on the run from an extradition order, has taken refuge in nearby hills and no one is able to leave or enter Lomath until he is found.As the police fail to find the wanted man and hours stretch into days, the town of Lomath begins to buckle under the strain. Like Russian dolls, each hostage seems to be harboring a captive of their own. Even Livy’s parents may have something to conceal, and Livy must learn that the source of danger is not always what it appears. Rosalie Knecht’s wise and suspenseful debut evokes the classics while conjuring the contemporary paranoia of the post-terrorist age. Relief Map doesn’t loosen its grip until the consequences of this catastrophic summer, and the ways in which a quiet girl’s fate can be rerouted and forever changed, are made fully apparent.

I just finished this book as I write this review and don't even know what to say.  The whole time I was reading this, I felt tense and uneasy just like the characters in the book.  To that end, the book was a total success.  But I feel like I am missing something with the plot or the meaning behind the story.  This book could just be a story for the story's sake -- the feeling of being a teenager, making bad decisions and sometimes without a reason but I feel like there must be something else, something more.  I am honestly left with more questions than answers at the conclusion of this and I still feel uneasy.  The idea of being trapped never sounds good and, yet, Livy made things infinitely worse for herself.  The problem is, we don't get much of a sense of Livy before so I don't even know if her actions were out of character or weren't . . . I will say I think this one will stay with me for a while, if only because I still need answers!!

I'm not even sure what genre to put this one in -- there is some mystery, it is as close to YA literary fiction as I've read and, yet, I don't even know if this should be considered YA.  I liked it but I don't know how to recommend it -- if you want to read a well written book and feel tense and confused, this may be for you.  Relief Map is scheduled to be released next Tuesday, March 29, 2016, and you can purchase HERE.

She stood on packed earth; the grass grew knee-high beside the bare patch, and each blade of it, each angled stem and puff of seed, was perfectly still.  She began to hear her own blood hissing in her ears.  She looked at the edge of the woods, the field going over the hill, the stand of walnut trees around the bedrock at the top, and none of it scratched out any sound to match the seething in her veins.  Her aliveness was monumental and the world was faint and distant and dark.

She had been like that for most of her adolescence, vivid to herself with the world muted and blurred around her.  Now the world was thunderous.  She pulled up a blade of grass and chewed on the end of it.  The world was loud and close, and her heart and lungs and brain were a tinny afterthought.