Review: Save Me, Kurt Cobain by Jenny Manzer 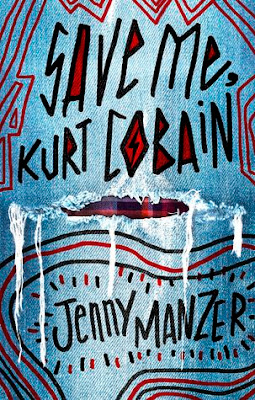 Save Me, Kurt Cobain by Jenny Manzer


What if you discovered that Kurt Cobain is not only alive, but might be your real father? This nuanced and bittersweet YA debut will keep you guessing until the end.

Nico Cavan has been adrift since her mother vanished when she was four—maternal abandonment isn't exactly something you can just get over. Staying invisible at school is how she copes—that and listening to alt music and summoning spirits on the Ouija board with her best friend and co-conspirator in sarcasm, Obe. But when a chance discovery opens a window onto her mom's wild past, it sparks an idea in her brain that takes hold and won't let go.

On a ferry departing Seattle, Nico encounters a slight blond guy with piercing blue eyes wearing a hooded jacket. Something in her heart tells her that this feeling she has might actually be the truth, so she follows him to a remote cabin in the Pacific Northwest. When she is stranded there by a winter storm, fear and darkness collide, and the only one who can save Nico might just be herself.

I'm really not sure what some of the authors who HIGHLY praised this book were thinking -- For example, Jennifer Niven called this book "utterly gorgeous."  I have to be honest and tell you that I thought it was a hot mess.  While the premise could have been amazing, I was bogged down and seriously struggled with poor editing (or lack thereof) and poor writing; one of my GR status updates while reading this was "painfully bad," and my opinion has not since improved.  I will date myself here but I remember the exact day when we found out that KC had committed suicide -- I was in middle school, it was a Friday and it was raining.  I can remember coming home after school, and being glued to MTV news all weekend.  I then spent that weekend making a necklace with a pendant frame that held a tiny and grainy black and white photo of KC, which I then wore to school for weeks.  I was a fan so this story really could have meant something to me, instead what I got was a very sad girl, searching for meaning in every little thing and often interrupting the actual action of the story with her own thoughts, which were nothing more than spewing facts from every unauthorized KC biography in existence.  It felt like a mish-mash of rote recitation of these unauthorized biographies and hopelessness.

This was a miss for me but it may not be a miss for you.  In the spirit of KC, I've seen Montage of Heck and it was just alright for me -- Last Days (while fictional) is amazing, and I recommend watching it.  Save Me, Kurt Cobain was released earlier this week, and you can purchase HERE.

There was a square card with a thirty-dollar gift certificate for Lyle's Place.  I kept the card in my pocket while we watched movies that night, and the next day I finally bought Nevermind, a full fifteen years after its release, and the follow-up In Utero, for good measure.  I holed up in my room all weekend listening to them, only surfacing for bathroom breaks and bowls of Life cereal.  The music filled all the cracks in my brain, at least for a time.  I put every book about Nirvana on hold at the library and stayed up until my eyes felt as if they'd been through an Easy-Bake oven.  When Kurt Cobain played his guitar, he looked weightless, like a blond marionette.  I can still picture the black-and-white concert photos of him.  Rising up, slamming down the chords, and then smashing stuff.