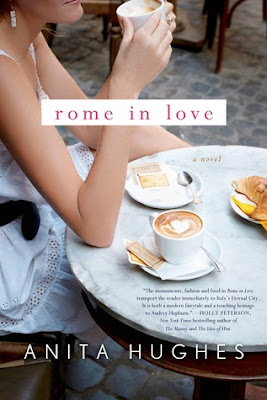 Rome in Love by Anita Hughes


From the author of LAKE COMO comes the story of a young actress who lands the lead in a film that is shooting in Rome, bringing about difficult life choices, new friendships, and a chance at love.

When Amelia Tate is cast to play the Audrey Hepburn role in a remake of Roman Holiday, she feels as if all her dreams have come true. She has a handsome boyfriend, is portraying her idol in a major motion picture, and gets to live in beautiful Rome for the next two months.

Once there, she befriends a young woman named Sophie with whom she begins to explore the city. Together, they discover all the amazing riches that Rome has to offer. But when Amelia’s boyfriend breaks up with her over her acting career, her perfect world begins to crumble.

While moping in her hotel suite, Amelia discovers a stack of letters written by Audrey Hepburn that start to put her own life into perspective. Then, she meets Philip, a handsome journalist who is under the impression that she is a hotel maid, and it appears as if things are finally looking up. The problem is she can never find the right time to tell Philip her true identity. Not to mention that Philip has a few secrets of his own. Can Amelia finally have both the career and love that she’s always wanted, or will she be forced to choose again?

With her sensory descriptions of the beautiful sites, decadent food, and high fashion of Rome, Hughes draws readers into this fast-paced and superbly written novel. Rome in Love will capture the hearts of readers everywhere.

The concept of this book is brilliant -- the star in a remake of Roman Holiday finds herself living out the actual plot of that movie along with discovering secret letters written by Audrey Hepburn during the original filming of Roman Holiday.  Sounds great, right?  Unfortunately, the execution was very poor.  I wanted to read this book not only for the Roman Holiday aspect (I love that movie!)  but also for the setting -- I've unfortunately never been to Rome but my husband has and I dream of visiting one day.  Sometimes it's so fun to read a book set somewhere far away -- to dream and envision that you are in that place along with the MC as the book progresses.  Here, however, despite the lovely setting, the glaring detractor from this book was the POV -- this book is written in the third person with the exception of the letters from Audrey scattered throughout.  The third person POV did not work for this book because it was stilted and joyless -- it was so much tell and never show.  Almost every paragraph went something like this: she verb.; she verb.; she verb.  Seriously!  If I had to read one more time about how Amelia (the MC) put on Lovely by Estee Lauder perfume, I was going to throw my kindle out the window.  I hate to exaggerate but the POV really hurt this book and what could have been a great story.  The letters from Audrey are the only shining star in the book because of the history but also that they were written in first person.  I won't get into some glaring character deficiencies and plot gaps just that, suffice it to say, this book didn't work for me.

I would recommend this to fans of Audrey Hepburn and/or Roman Holiday.  I was also reminded slightly of Goodnight June just because this book also created a fictionalized account of how a real piece of art was created but it was not nearly as well executed as Goodnight June.  However, you may just want to skip this book and watch the movie again.  Rome In Love will be released, tomorrow, August 4, 2015, and you can purchase HERE!