Review: No Place to Hide by Susan Lewis 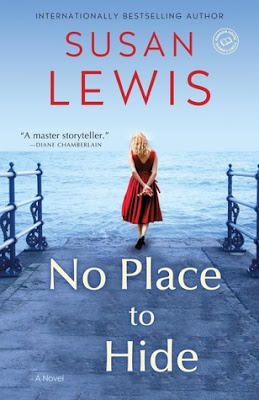 No Place to Hide by Susan Lewis

Susan Lewis, the internationally bestselling author of more than thirty novels, delivers her first novel set in the United States! Perfect for readers of Diane Chamberlain, Lewis is a master at evoking the emotional intensity of complex domestic dramas.

Fleeing England from a broken marriage, Justine returns to her grandmother’s hometown on picturesque Lake Maxinkuckee, Indiana. There she hopes for a fresh start, and a chance to heal her broken heart in the pristine lakeside surroundings. But an ocean may not be enough to protect Justine from the devastating secrets that drove her away, and the memories that continue to haunt her new life...

No Place To Hide is a book driven by the Justine (the MC) fleeing  to the U.S. from a deep, dark secret in England.  There were a lot of flashbacks to Justine's former, ideal life interspersed with the tatters of her current life post-secret.  These flashbacks and the first bit of the book were well written and intriguing.  However, once it was finally revealed what this deep, dark secret is, the book was a bit anti-climatic.  I think the secret was built up so much that there was no way it could have been as bad as the it was supposed to be.  Granted, it was not something pleasant and it was shocking, but from the MC's actions, I was expecting something vastly different. It just made no sense to me that she would have taken the actions she took as a result of this secret.  There was also another backstory within her family that had no place in this book as well as a scene at the end when the MC is in a fever dream for a week that was totally confusing and should not have made the final cut.  These small details detracted from the better parts of the book and left me ultimately unsatisfied.

That being said, I would recommend this to anyone that likes mysteries along the lines of Jodi Picoult or Diane Chamberlain.  This book has those same twists and turns but without the exact execution of those authors.  No Place To Hide was just released a few weeks ago, and you can purchase HERE!

So this was what it was like beyond the corn-silk veil.

Others called it a curtain, but she preferred veil.  This allowed for a more dreamlike connection between the blue skies and still waters of this hauntingly beautiful town, and the world out there, filled with cornfields, highways, cities, oceans-- the world, the family, she'd left behind.