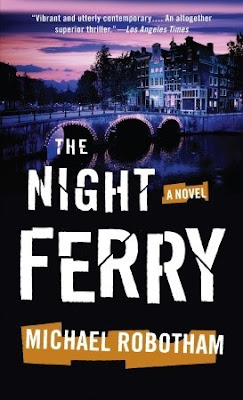 The Night Ferry by Michael Robotham

A gripping tale of betrayal, murder, and redemption.

Detective Alisha Barba hadn't heard from her long lost friend Cate in years, but when she receives a frantic letter pleading for help, she knows she must see her. “They want to take my baby. You have to stop them,” Cate whispers to Alisha when they finally meet. Then, only hours later, Cate and her husband are fatally run down by a car.


At the crime scene, Alisha discovers the first in a series of complex and mysterious deceptions that will send her on a perilous search for the truth, from the dangerous streets of London's East End to the decadent glow of Amsterdam's red-light district.

The Night Ferry was a fine mystery/crime thriller although the mystery was solved long before the book ended leaving the last 20% or so of the book as a bit boring.  I liked the MC, Alisha Barba, but the she was definitely a bit self-righteous and so confused at times.  I couldn't help but think that she was made to seem to indecisive and weak because it was a male author writing a female MC but it is possible that I am projecting.  I did love the settings of London and Amsterdam in this book, having been to both several times, and the actual crime solving was very good.

I would recommend this to anyone that likes thriller mysteries along the lines of James Patterson or Jonathan Kellerman.  This book was unique in that it was a female MC written by a male author but I'm not sure the voice of the MC was executed perfectly.  The Night Ferry was just released on e-book in the US last week, and you can purchase HERE!

When the day comes that I am asked to recalibrate the calendar, I am going to lop a week off January and February and add them to October, which deserves to be forty days long, maybe more.

I love this time of year.  The tourists have long gone and the kids are back at school.  The TV schedules aren't full of reruns and I can sleep under a duvet again.  Mostly I love the sparkle in the air, without the pollen from the plane trees so that I can open my lungs and run freely.