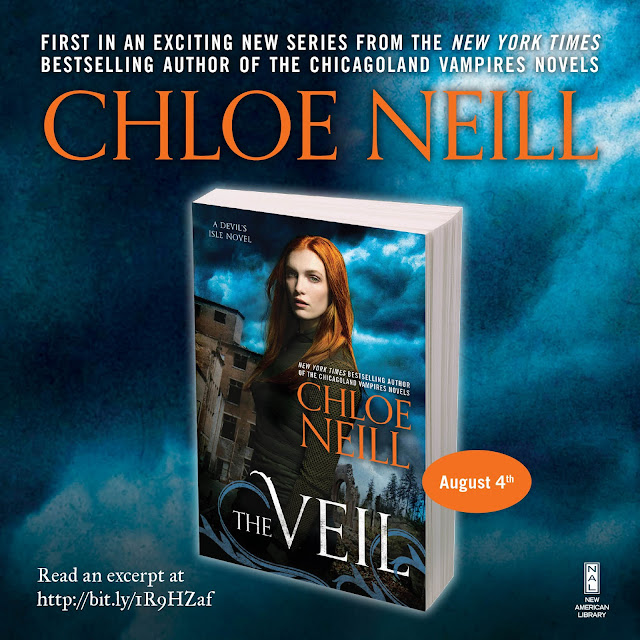 I'm so excited to be reviewing and giving away swag from Chloe Neill's latest book, The Veil, today!  This is the first book in a new series and, based on it alone, I know this is going to be one of my favorite UF/PR series!  ENTER TO WIN SOME SWAG BELOW!!!!!!

Seven years ago, the Veil that separates us from what lies beyond was torn apart, and New Orleans was engulfed in a supernatural war. Now, those with paranormal powers have been confined in a walled community that humans call the District. Those who live there call it Devil’s Isle.

Claire Connolly is a good girl with a dangerous secret: she’s a Sensitive, a human endowed with magic that seeped through the Veil. Claire knows that revealing her skills would mean being confined to Devil’s Isle. Unfortunately, hiding her power has left her untrained and unfocused…


Liam Quinn knows from experience that magic makes monsters of the weak, and he has no time for a Sensitive with no control of her own strength. But when he sees Claire using her powers to save a human under attack — in full view of the French Quarter — Liam decides to bring her to Devil’s Isle and the teacher she needs—even though getting her out of his way isn’t the same as keeping her out of his head.


As more and more Sensitives fall prey to their magic, and unleash their hunger on the city, Claire and Liam must work together to save New Orleans, or else the city will burn…

I loved this book so much!  It reminded me of early Chicagoland books and early MEthan but set in New Orleans.  To be fair, the story in The Veil is totally different than CV but Chloe Neill's pace and character development shine through in both series so much for me to make the comparison.  Also, Claire, like Merit, is one kick-ass heroine!  I love that neither of them ever play the damsel in distress and they are both so brave.  And I would be remiss if I didn't drop a line about Liam: Ethan (from CV) is one of my all time book boyfriends and Liam is definitely testing me here!  I liked that he allowed Claire to shine and to fight without trying to overshadow her with his experience or suggest that she wasn't up to the task (as is often the case with some of these alpha males in UF).  Liam is not only a teacher but a protector of New Orleans, the same as Claire.  As anyone who's been to New Orleans knows and feels, there is a unique devotion, feeling and awakening of all your senses in the city -- Chloe Neill perfectly captured this spirit and it often felt that New Orleans itself was a character in this novel.  Finally, there is plenty of suspense and romantic tension in The Veil to keep even the most greedy reader totally satisfied.  I can't wait for more books in this series!


I HIGHLY recommend this book to fans of the Chicagoland Vampires series (one of my all time favorites!) as well as any and every fan of urban fantasy and/or paranormal  romance.  I can just tell that this series is going to be just as awesome as CV and is the true epitome of anything one could want in a UF/PR series!

Unfortunately, jazz wasn't enough to take my mind off Liam Quinn.  Last night had rocked me. To come so close to something I didn't even know I'd wanted, then to know that I did, only to have it ripped away . . . I wasn't exactly sure what was was going through Liam's head, or what he couldn't "afford" about me.  But I had a sinking suspicion.  I was a Sensitive-- a wraith-in-waiting.  I would become a wraith if I couldn't learn to control my magic properly.  If I wasn't vigilant enough, or if I made a mistake, I'd become the same monster that had killed his sister, that he hunted.  How could he want me when that was the case?

The Veil comes out August 4, 2015, and you can purchase at any of these retailers:
Amazon | Barnes & Noble | iBooks | Powells | Books-A-Million | Kobo | Indiebound | Audible