Review: The Wedding Pact (The O'Malleys #2) by Katee Robert 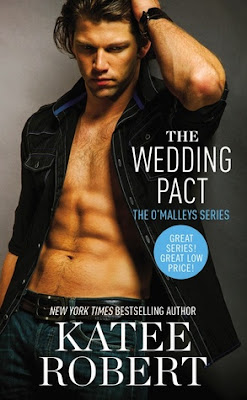 The Wedding Pact (The O'Malleys #2) by Katee Robert

Carrigan O'Malley has always known her arranged marriage would be more about power and prestige than passion. But after one taste of the hard-bodied, whiskey-voiced James Halloran, she's ruined for anyone else. Too bad James and his family are enemy number 1.

Hallorans vs. O'Malleys—that's how it's always been. James should be thinking more about how to expand his family's empire instead of how silky Carrigan's skin is against his and how he can next get her into his bed. Those are dangerous thoughts. But not nearly as dangerous as he'll be if he can't get what he wants: Carrigan by his side for the rest of their lives.

I liked this one.  I think my first GR status update was that I was not expecting so much plot -- I hope that doesn't sound awful but usually when a shirtless guy is on the cover of a book, there may not be a lot of history or plot that isn't forward momentum for the romance.  Not so, here -- in fact, for me, there may have been a few too many details about the backstory,  and about the two mob families to which the two MCs/love interests belong.  This has almost a Romeo and Juliet feel -- definitely forbidden romance.  I liked James a lot and the chemistry between he and Carrigan was real so I'm not exactly able to pinpoint why this isn't a higher rating for me.  I did feel like this took forever to read and, again, maybe was too long because of all the plot/backstory/history that did not move the romance forward.  That being said, this was still an enjoyable read.

I would recommend this to fans of this series and fans of contemporary romance that has a bit of an edge!  Katee Robert definitely knows how to write steamy scenes!  The Wedding Pact comes out today April 26, 2016, and you can purchase HERE!

She could go home, climb in a bath, and hope that would be enough to soak away her misery.  Or she could take this man's hand and run away from reality for awhile.  Really, it was no contest.  Carrigan slipped her hand into his, "Where we going?"