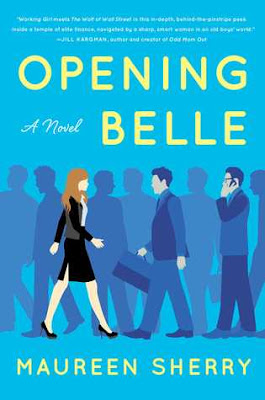 Getting rich on Wall Street would be a lot more fun if the men would keep their hands off her assets.

A whip-smart and funny novel told by a former Wall Street insider who reveals what it’s like for a working woman to balance love, ambition, and family in a world of glamorous excess, outrageous risk-taking, and jaw-dropping sexism.

In 2008, Isabelle—a self-made, thirty-something Wall Street star—appears to have it all: an Upper West Side apartment, three healthy children, a handsome husband, and a high-powered job. But her reality is something else. Her trading desk work environment resembles a 1980s frat party, her husband feels employment is beneath him, and the bulk of childcare and homecare still falls in Belle’s already full lap.

Enter Henry, the former college fiancé she never quite got over; now a hedge fund mogul. He becomes her largest client, and Belle gets to see the life she might have had with him. While Henry campaigns to win Belle back, the sexually harassed women in her office take action to improve their working conditions, and recruit a wary Belle into a secret “glass ceiling club” whose goal is to mellow the cowboy banking culture and get equal pay for their work. All along, Belle can sense the financial markets heading toward their soon-to-be historic crash and that something has to give—and when it does, everything is going to change: her marriage, her career, her world, and her need to keep her colleagues’ hands to themselves.

Where do I start?  This very well might be a case of it's not you, it's me.  My first status update when reading this book was: I didn't know anyone hated their life this much.  And, truly, I could never comprehend, not during the entire course of this book, why someone would continue to live a life that made them so unhappy -- Belle is incredibly unhappy in her job, mostly because she is in a thankless situation with no room for advancement and feels like a bad mother since she is never home, hates almost everyone she works with because they are horrible to women and the culture is beyond hostile and misogynistic, is unhappy in her marriage and the fact that her husband doesn't really work but that she still has to do 90% of their children/home tasks, and still she is a slave to the absurd amount of money that she brings home every year, even though all she wants is more money and feels like she will never have enough money.  Even though Belle figures out that her job is essentially ruining the lives of ordinary Americans, it's all about her and how she can make more money.  And then there is her new biggest client -- he ex-fiance who left her on the street without telling her why.  It was the most bizarre "break-up" scene I have ever read and the book never explains it.  I will say that there was good social commentary in this book about the crash as well as being a woman in a male dominated career but it just left me depressed.  The ending was also pretty terrible -- everything resolves albeit in a tidy, if not ridiculous, way but I felt like something was missing.

I would recommend this to fans of books like The KnockOff or BigLaw, both also about different industries but they have that same frantic New York pace and what it means to be a woman who should be able to have a career, whether it be in a male dominated world or a youth dominated field.  Many of the issues I had with this book may not be an issue for you, at all, and the writing is crisp.  Opening Belle came out this week on February 2, 2016, and you can purchase HERE.

Bruce entwines his fingers behind his head and starts doing sit-ups.  He's done speaking but now it's me who is agitated.  There are glimmers of something that deep down I've already known to be true about my line of work.  It's something I'd rather not think about and now I have to.  I lie next to him and we synchronize our sit-ups.  Brigid comes and sits on my middle to help.  We go up and down without speaking, just thinking.  Woof starts licking the salt off Bruce's face.  Together we grunt, contracting our soft bellies in uncomfortable crunches and exhaling with temporary relief.  We do this over and over while we both wonder what is real and what is not.  Do I have a great job or am I wrecking people's lives?  Do we have a great marriage or are we just getting by?  We overflow with questions we can neither ask of each other nor answer ourselves.