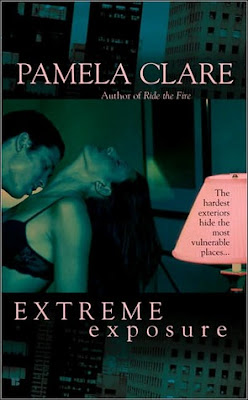 It's been years since her child's father dumped her, and since then Kara McMillan has kept men at bay - although every day she aches more for a lover's touch. But to get that, the hard-boiled journalist must become vulnerable - a feeling she vowed never to have again.

With his dangerous good looks, charm, and power, Senator Reece Sheridan could have just about any woman he sets his piercing eyes on. But he's intrigued by only one. This Kara, this gutsy investigative reporter, has a sensuality that arouses him to no end. If she's a firebrand in print, he guesses, she must be just as fiery in bed...

But this is no fling. A sudden political scandal - and attempts on Kara's life - could very well drive them apart. Or maybe, just maybe, adversity could draw them into a bond even more intense than their steamy sexual embraces.

This one hopped onto my radar on GR and seeing that it was a political romance with high reviews, I couldn't wait to dig in.  I devoured this one in a day -- equal parts romance, politics, and suspense.  I really liked the journalism side of this, too -- it touched on whistle-blowers, journalistic ethics and the implications of protecting a source.  But the real heart of the story is the relationship between Kara and Reece.  Senator Reece Sheridan is definitely my new book boyfriend -- If you thought the sensitive alpha was elusive, you need to read this one!  He was so amazing with skittish Kara that I didn't even care that there is a child in this story (not always my favorite thing).  This was also super steamy; I was actually surprised by how hot some of the scenes were but I am definitely not complaining!

I would not hesitate to recommend this to fans of contemporary romance and fans of romantic suspense and political romance (♥♥♥).  Definitely going to read the rest of this series!

For a moment they just stood there, just held one another.  He was warm from his climb up the stairs, his scent and the strength of his body both familiar and reassuring.  But for the first time since she'd met him, Kara felt the vulnerability beneath that strength.  Somehow, his anguish seeped into her.  Her heart gave a painful lurch, and hot tears came from nowhere to blur her vision.

She wanted to tell him, wanted him to know how much he meant to her, but she couldn't bring herself to say the words.  Instead, she stood on her toes, brushed her lips over the day's growth of stubble on his cheek, and left a trail of kisses down his jaw to his throat.