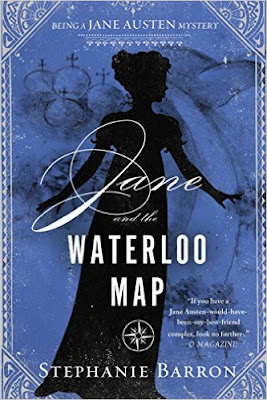 November, 1815. The Battle of Waterloo has come and gone, leaving the British economy in shreds; Henry Austen, high-flying banker, is about to declare bankruptcy—dragging several of his brothers down with him. The crisis destroys Henry’s health, and Jane flies to his London bedside, believing him to be dying. While she’s there, the chaplain to His Royal Highness the Prince Regent invites Jane to tour Carlton House, the Prince’s fabulous London home. The chaplain is a fan of Jane’s books, and during the tour he suggests she dedicate her next novel—Emma—to HRH, whom she despises.

However, before she can speak to HRH, Jane stumbles upon a body—sprawled on the carpet in the Regent’s library. The dying man, Colonel MacFarland, was a cavalry hero and a friend of Wellington’s. He utters a single failing phrase: “Waterloo map” . . . and Jane is on the hunt for a treasure of incalculable value and a killer of considerable cunning.

The best way to describe this book is Murder, She Wrote meets Jane Austen in which Jane Austen is akin to Jessica Fletcher in solving the murder mystery even though all the men think she is a bumbling, fragile lady.  You would think that since I love both Jane Austen and Murder, She Wrote, this would be a smash hit for me.  But it wasn't.  I know this will sound odd but I felt like Jane Austen was not truly how Jane Austen would be (or at least how I imagine her) -- she was a bit annoying and the book took at least 40% to get into and for the pacing to pick up.  I am not sure if I will go back and read earlier books in this series -- it is amazing that there are thirteen of them!  I had no problem reading this one without reading prior books although there were a ton of "editor's notes" via footnotes that referred to previous books.  That's another criticism I have, in general, about this book—all of the "editor's notes" that were supposed to show how historically accurate the author was in her story instead came off as condescending and as if the reader was not familiar at all with the regency era (uneducated comes to mind).

I would still recommend this to anyone that likes mystery, the regency era and Jane Austen, in particular because you may have better luck than I did with it.  Jane and the Waterloo Map is scheduled to be released February 2, 2016, and you can purchase HERE!

But there is no fool like an old fool.  The haunting image of a creature named Isabella rose before my eyes.  It must be impossible to ask him directly about her importance in his life.  He is a man of the World, after all, as his father is forever telling me.  He owes no explanation of his habits or arrangements.  Once, I was a green girl enough to dream of happiness with an improbable suitor, from an utterly different world—